[ The Korea Herald – Send E-mail ]
Bulgaria celebrates Council of EU presidency on National Day
By Joel Lee
Published : Mar 12, 2018 - 16:06
Updated : Mar 12, 2018 - 16:12
The Bulgarian Embassy celebrated last week the presidency of the Council of the European Union this year, as well as its 140th anniversary of national independence from the Ottoman Empire on March 3, 1878.

“In March 2018, exactly 140 years after the restoration of our statehood, the Republic of Bulgaria is holding the presidency of the Council of the EU until June 30, the first time since our EU accession in 2007,” said Bulgarian Ambassador Petar Andonov in a speech at a reception in Seoul on March 5.

“We are glad that our presidency also coincides with the 55th anniversary of diplomatic relations between the EU (then the European Economic Community) and Republic of Korea.” 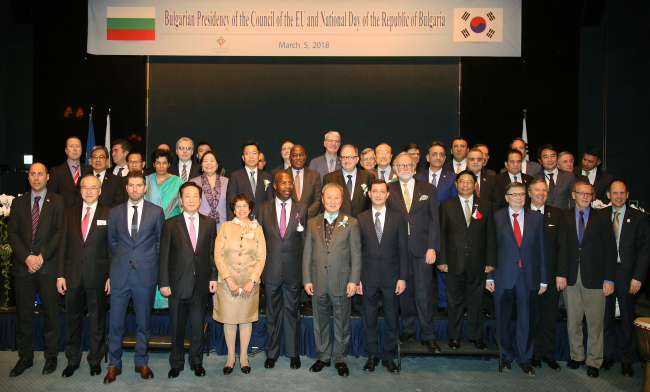 Foreign ambassadors, dignitaries and guests pose at a reception in Seoul on March 5, marking Bulgaria’s National Day and its presidency of the Council of the European Union in the first half of 2018. (Bulgarian Embassy)
Sofia assumes the rotating presidency from January through June. Under the slogan “United we stand strong” -- likewise displayed on Bulgaria’s coat of arms -- the Eastern European state supports close cooperation among EU member states and institutions to build “a stronger, more secure and solidary Europe,” the envoy told The Korea Herald.

The first is ensuring sustained economic growth and social cohesion by empowering and educating the younger generations through initiatives such as the Erasmus Plus program. Secondly, Bulgaria will work to enhance Europe’s security and stability and better manage migration by reforming the European common asylum system, and by improving the interoperability of information systems and databases to better counter terrorism and control borders.

“I would like to use this opportunity to congratulate the Korean authorities for their successful hosting of 2018 Winter Olympic Games in PyeongChang, the largest in history,” said the ambassador. “The games will also be remembered for transforming the Olympics viewing experience through the ultra-fast 5G network.” 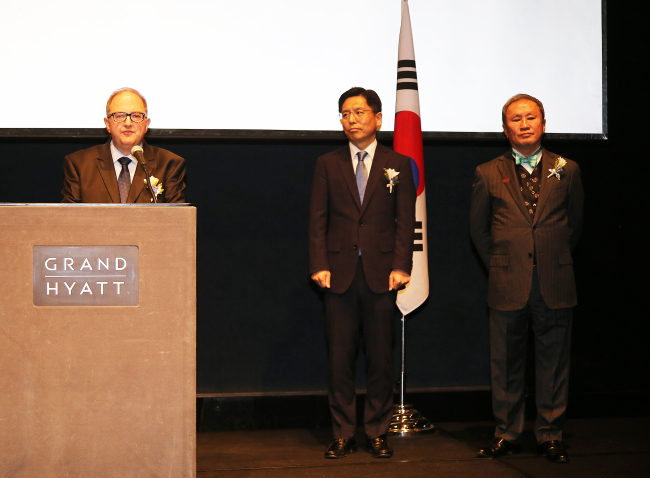 During Lee’s visit to Bulgaria, the two governments agreed to boost cooperation in trade and investment, energy, defense and agriculture, among others. As a follow-up, a public-private economic delegation from Korea will visit Bulgaria at the end of March.

“Korea and Bulgaria share many things in common, including a character of national diligence, huge passion for education and excellence in information communications technology,” said Noh. “Based on these similarities, I am confident that we will continue to successfully enhance our relations in the years to come.”

“We are an information technology powerhouse in Southeastern Europe and working with our partners to create another ‘Silicon Valley’ in the Western Balkans,” he said, referring to Sofia Tech Park -- the first innovation ecosystem in Southeastern Europe -- which can accommodate a diverse array of research and development facilities and enterprises.

Having transitioned from communism to democracy and a market economy, Bulgaria can also help Korea as it tries to engage with North Korea and rebuild the communist country after a prospective unification, Andonov expounded.

“As a former communist nation, we can share our experiences on matters of transition to democracy and free market economy -- issues relevant to the two Koreas’ prospective unification,” the diplomat said.