With the world shifting away from polluting energy sources to cleaner forms, Kazakhstan is keen on making the transition and eventually becoming the region’s pacesetter in the green economy, according to its top diplomat in charge of green technology investments.

The blueprint for Kazakhstan’s plan to become a greener economy is the International Center for Green Technology and Investment Projects, a state-funded public institution housed at the site of the Expo 2017 Astana, which brought together the world’s pioneering ideas and solutions for future sustainable energy.

Announced by Kazakhstan’s President Nursultan Nazarbayev at the 70th anniversary session of the United Nations General Assembly in New York in 2015, the initiative follows through from Astana’s commitment to sustainable energy and development, as highlighted at the international exposition last year. 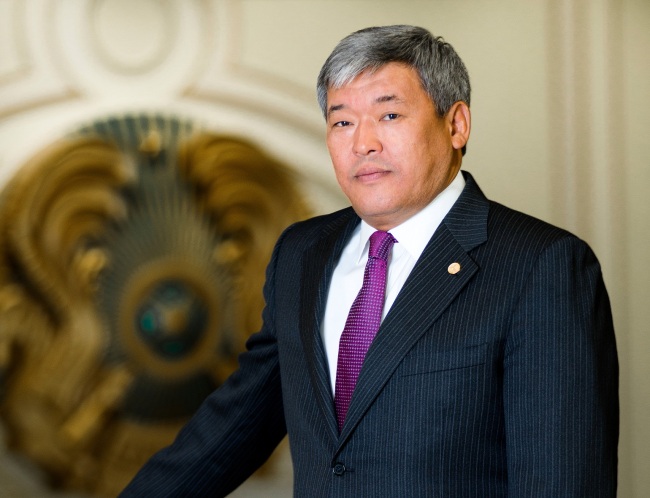 Chairman of the International Center for Green Technology and Investment Projects, Rapil Zhoshybayev (Astana Times)
“South Korea is a long-term strategic partner of Kazakhstan, with thousands of investors already operating successful projects in the country. In renewable energy and circular economy, Korea can help Kazakhstan by sharing its knowledge, expertise and investment capabilities,” the center’s Chairman Rapil Zhoshybayev said in an interview during his visit to Korea last week.

Noting Korean companies are renowned for their technologies and best practices in energy, metallurgy, electronics, shipping, construction and engineering, the diplomat argued that there was a lot of synergy to be gained from using Korean capital and skills in those industries in Kazakhstan.

“The green economy is not just generating electricity from renewable sources, but also about energy efficiency, waste treatment and modernizing existing thermal facilities into ecofriendly ones,” he stressed. “My other goal is to establish mutually beneficial business relationships with Korean green tech institutions and companies, and attract their expertise, knowledge and investments into Kazakhstan.”

During his visit to Korea, Zhoshybayev met with Korea Deputy Minister for Environment Yoo Je-chul, officials from the Korean Institute for Energy Research, Green Growth Center Korea and Green Climate Fund, as well as heads of leading renewable energy companies.

Touching on the role and modus operandi of the center, the envoy said it provides support for investment and research and development in green energy and the circular economy, with the government offering legislative backing. The center, located within the Astana International Financial Center and already running with some 30 staff members, aims to grow in size and scope over the coming years, he said.

The financial center -- incorporating principles of English law and aiming to be a hub of finance covering Central Asia, the Caucasus, Eurasian Economic Union, the Middle East, West China, Mongolia and Europe -- provides support with fiscal and tax relief and arbitration. 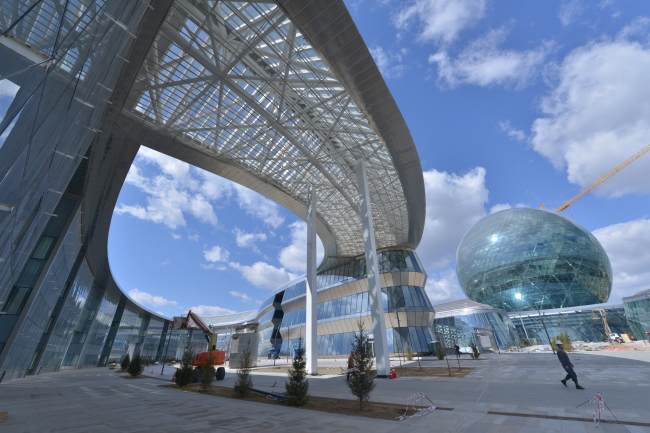 Astana International Financial Center is located at the site of Expo Astana 2017 on the outskirts of the Kazakh capital. (Astana Times)
“Kazakhstan, being the world’s ninth-largest country in terms of landmass, possesses huge unexplored potential in renewable energy as measured in terawatt hours. It includes solar, wind, hydro, biomass geothermal energies,” he said. “Our president unveiled a vision to move our country toward the green economy, with the share of renewables taking up 3 percent of the national energy mix by 2020, 10 percent by 2030 and 50 percent by 2050.”

The share of renewables was only 1 percent last year, he pointed out, adding that the economy derives around 70 percent of its energy from coal-based thermal plants inherited from the Soviet days, and the rest primarily from oil and natural gas.

“Our president has set a clear goal of entering Kazakhstan into the ranks of the 30 most developed economies by 2050. In relations to this, our move away from oil, gas and coal to a more diversified energy portfolio with a larger share of renewables is evidence of our commitment,” according to Zhoshybayev.

“Our next goal is to move toward the circular economy, which creates zero waste in industrial activities. Our center will work on that as well, being the hub of investment, services, research and development for the whole of Central Asia.”

Turning to the China-led “One Belt, One Road” global infrastructure and economic integration initiative, of which Kazakhstan plays an integral part, the diplomat said his country would become a crucial transit nexus, linking the Eurasian economies and transporting Chinese and South Asian goods to Europe.

Kazakhstan will also have access to the open seas through the Chinese port of Lianyungang, which would allow the shipment of Kazakhstan-made products to global destinations, including Incheon and Busan.