The event “Geographies, Contemporary Mexican Art in Korea” runs through next Tuesday free of charge. It has been arranged in collaboration with the Seoul Design Foundation.

“‘Geographies’ is a brief yet representative display of quintessential contemporary Mexican art, bringing together 42 works of our four renowned creators who share the love of the Mexican landscape and life,” said Mexican Ambassador to Korea Bruno Figueroa in a speech.

“As you may know, Mexico has been recognized around the world for our rich and complex cultural traditions within Latin America. Ours is a culture deeply rooted in ancient Indian and Spanish heritages, which have helped their promotion on the world stage.” 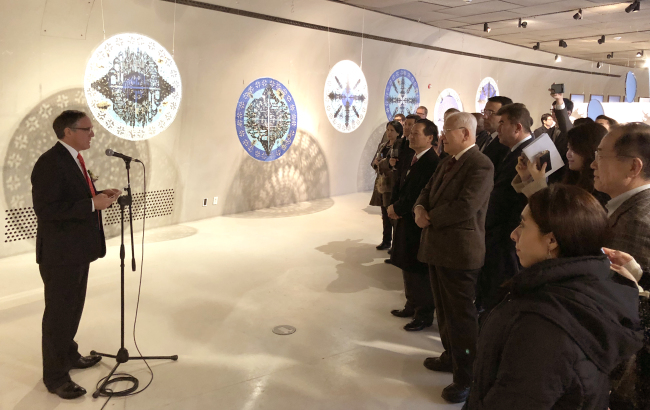 Mexican Ambassador to Korea Bruno Figueroa (left) speaks at the opening ceremony of the exhibition “Geographies, Contemporary Mexican Art in Korea” at Dongdaemun Design Plaza in Seoul on Wednesday. (Mexican Embassy)
Despite being under the sway of key European cultural influences, Mexican art has managed to create its unique voice and style, he added, noting that the two-decade-long revolution in 1910 gave birth to epochal styles -- the muralism and the rupture movement, among others.

“And while many of the millions of international visitors who come to Mexico, who numbered 39 million last year, focus their attention on the Pre-Columbian and 20th-century art exemplified by Frida Kahlo and Diego Rivera, we are trying to stress through this exhibition that today’s Mexican artists also draw their inspirations from our nation’s aesthetic traditions,” he highlighted. “Many of our artists nowadays fulfill an important role of art, which is to try to answer complex questions of the modern life in Mexico and the world.”

De Stefano’s photographic collection “All the Deserts are My Desert” comprises 20 colorful pictures captured across seven deserts around the world: the Sahara, Gobi, Atacama, Nazca, Thar, Great Basin and Chihuahua. Rosas’ “From Geometry to Geography” highlights visual changes stemming from 2-D to 3-D geometries -- based on Mexico’s natural landscapes and medieval colonial architecture -- accentuated in different angles and directions.

The exhibition was previously displayed at national galleries in Bangkok and Jakarta.

The opening ceremony featured a traditional musical performance by group Mariachi Quevedeno, who traveled from Mexico to Korea also to participate in events parallel to the PyeongChang Olympic Games.

Figueroa expressed his gratitude to Dongdaemun Design Plaza and Seoul Design Foundation, as well as corporate sponsors Highland Foods, Mando Corp. and the Mexico Tourism Board in Korea.