[ The Korea Herald – Send E-mail ]
FM Kang soon to meet Tillerson in effort to broker talks between Pyongyang, Washington
By Yonhap
Published : Feb 28, 2018 - 15:56
Updated : Feb 28, 2018 - 15:56
GENEVA -- Foreign Minister Kang Kyung-wha will soon meet with US Secretary of State Rex Tillerson in the United States as Seoul ramps up efforts to broker dialogue between Washington and Pyongyang, the ministry has said.

"I am trying to talk to my counterpart Tillerson whenever there's the chance and time. ... (The two sides) are currently discussing the meeting to take place in the near future," Kang said in an interview with Yonhap News Agency in Geneva on Tuesday.

She was on a three-day visit to the Swiss city to attend the high-level segment of the United Nations Human Rights Security session, as well as the Conference on Disarmament. She will depart for Seoul on Wednesday. 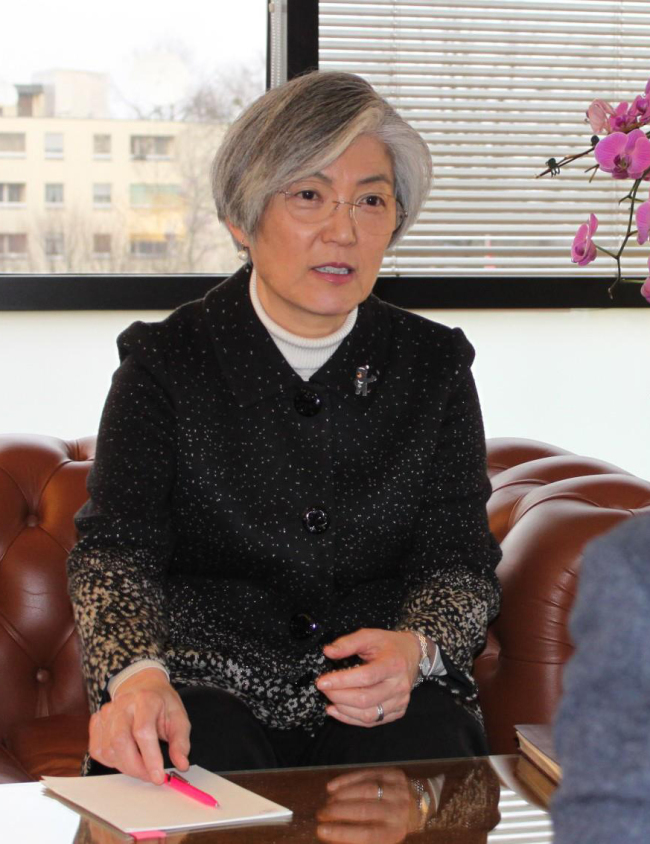 (Yonhap)
Both Seoul and Washington are aware that they have until April to generate any chance to formulate avenues for talks with North Korea, Kang said, referring to the resumption in April of the joint annual military exercises between Seoul and Washington, which were delayed due to the PyeongChang Olympics.

Asked whether US-North Korea dialogue is possible before April, she said, "There are various possibilities, but I cannot easily say that this is going to happen (before April).

"I cannot predict the timing (of US-North Korea talks) for sure, but we are pursuing the goal of helping generate the talks between the US and North Korea," Kang also said.

She also assured that any progress in inter-Korean relations will take place in step with US-North Korea talks for denuclearizing the Korean Peninsula.

Touching on the retirement of Joseph Yun, the US point man on the North Korean nuclear issue, at the end of this week, Kang said Seoul will work closely with the US even after his departure.

"Government affairs are conducted within an organization (not by an individual)," Kang said, dismissing worries that Yun's absence may intensify the voices of hard-liners on North Korean affairs in Washington.(Yonhap)