The United States, the United Nations and other nations imposed tough economic sanctions on the reclusive country in retaliation for its nuclear and missile tests last year.

“The impact of the sanctions doesn’t appear to have spilled over into the market yet, but there is a possibility that North Korea may suffer further setbacks in production, trade and consumption, sharply aggravating the welfare of economic actors.” 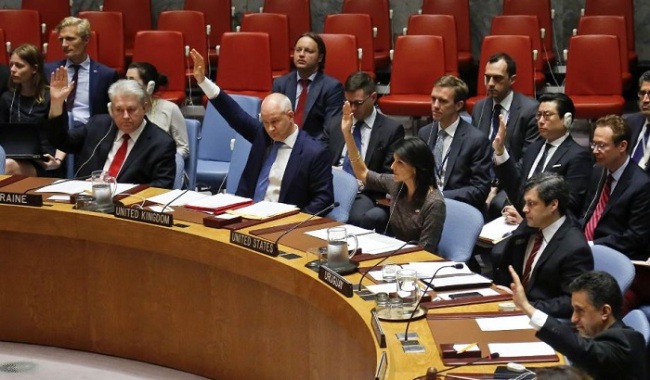 Ambassadors to the United Nations raise hands in a Security Council resolution vote to sanction North Korea at UN headquarters on June 2, 2017 in New York. (AP)
Kim Young-hoon of the Korea Rural Economic Institute estimated North Korea’s grain output for 2017 at 4.71 million tons, down 2 percent from the previous year.

“Pyongyang’s farm production didn‘t increase last year, despite a series of agricultural reform measures since 2012,” Kim said. “It is difficult to paint a positive picture of North Korea’s food supply and demand this year.”

The plunge contributed nearly 80 percent to the decrease in the value of North Korean trade with China last year, Lee said, predicting tougher international sanctions will give Pyongyang less leeway in its policy options this year.

Lee Suk-ki, a researcher at the Korea Institute for Industrial Economics & Trade, estimated that North Korea’s mining, agricultural and construction sectors stalled or contracted in 2017, compared with the previous year.

The sectors’ slack or weaker activity probably resulted from a severe drought, a decline in trade stemming from international economic sanctions and a correction following the previous year’s push to ramp up production, the economist said. (Yonhap)