[ The Korea Herald – Send E-mail ]
Samsung set to showcase Bixby 2.0 via new Galaxy Note this year
By Yonhap
Published : Feb 27, 2018 - 09:46
Updated : Feb 27, 2018 - 09:46
Samsung Electronics Co. said Tuesday it plans to showcase a new edition of its artificial-intelligence program, Bixby 2.0, as early as the second half of this year through the presumed Galaxy Note 9 phablets.

During a press conference held at this year's Mobile World Congress in Barcelona, Spain, Koh Dong-jin, head of the IT & Mobile Communications Division, said Samsung is currently testing the beta version of Bixby 2.0 with some 800 partners.

"Considering the current speed (of development), the Bixby 2.0 can be showcased through the Galaxy Note 9," Koh said. "The Bixby 2.0 will allow users to experience a wider scope of voice-assistance features." 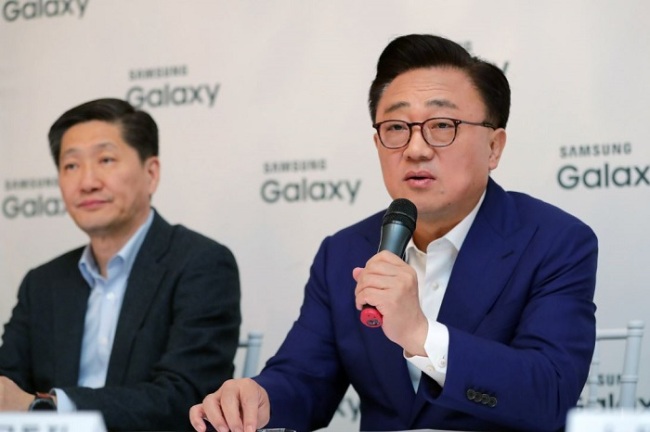 Koh Dong-jin, right, head of Samsung Electronics Co.`s IT & Mobile Communications Division, speaks to reporters during a press conference in Barcelona, Spain, on Feb. 27. (Yonhap)
Many expected the Galaxy S9 just showcased this week would come with the updated program as Samsung hinted last year on releasing Bixby 2.0 at the MWC.

Koh said the new Bixby will also focus on expanding its own ecosystem in the industry, as the first edition failed to do so by being released too early.

"The Galaxy S9 will be released earlier in the year than the Galaxy S8 was, and as we plan to release various marketing strategies to beef up demand, I believe overall numbers will be better," Koh said.

"I have been receiving feedback that (the response to the Galaxy S9) is better than expected, considering there weren't many expectations in terms of innovation," Koh said. "I believe it is a matter of perspective (in terms of innovation). Now, the innovation is not about forcing technologies to customers but bringing convenient experiences in features that users actually use."

Samsung said it will also keep a watchful eye on emerging markets where its presence has been falling off recently.

"As it is true that Samsung lost its top spot in the Indian market in the fourth quarter in terms of volume, we are keeping close tabs (there). Still, we are a dominant leader in terms of annual sales," Koh said, claiming the company is making various efforts in the region.

Samsung said the company is doing all it can to prepare for the rise of the fifth-generation network.

"Transition to 5G will become much faster than the movement toward the smartphones observed 10 years ago," Koh said.

When asked about the release of Lee Jae-yong, the de facto heir of Samsung Group, from prison, Koh said Lee has helped him make deals with partners, without providing specific details. Lee's absence had been considered to have sparked a leadership crisis within the company.

"(Lee) just got out, but I feel comfortable with it," Koh said.

Lee was released earlier this month after an appellate court handed him a suspended sentence dismissing most of the key charges against him in a bribery and corruption scandal that led to the ouster of former President Park Geun-hye last year. (Yonhap)