South Korean Foreign Minister Kang Kyung-wha left for Geneva, Switzerland, on Sunday to attend a UN meeting on human rights where she will likely touch on North Korea and the wartime sexual slavery of Korean women by Japan.

Kang plans to deliver a keynote speech at the UN Human Rights Council meeting which kicks off Monday (local time), according to the foreign ministry. The Geneva-based council has adopted a resolution condemning the North's human rights situation every year since its launch in 2006.

She also plans to attend an arms control conference on Tuesday. 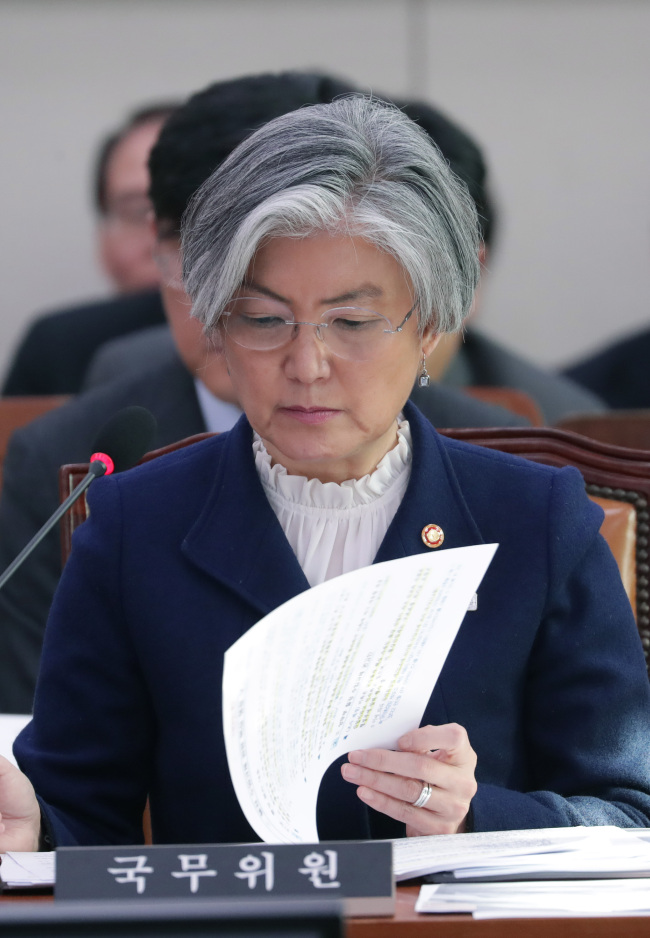 Kang's trip to Geneva comes as South Korea has been actively engaging with North Korea, deemed to be one of most notorious countries in the world for human rights violations.

North Korean leader Kim Jong-un recently invited South Korean President Moon Jae-in to Pyongyang for what could be the third inter-Korean summit. Moon has yet to formally accept the invitation but expressed hopes of creating the right conditions for the meeting to take place.

The U.S. has been active in shedding light on human rights violations by the North Korean regime. President Donald Trump invited a North Korean defector to his State of Union speech and Vice President Mike Pence met a group of escapees from the North during his recent visit to South Korea.

Another sensitive topic likely to be raised by South Korea is Japan's sexual slavery of Korean women during World War II. The victims are euphemistically called comfort women.

Under a 2015 deal on the matter, the two agreed to refrain from criticizing each other on the international stage.

In January, however, Kang said that the comfort women issue has not been resolved by the deal and emphasized that "relevant" countries should help the victims recover their dignity and heal their wounds from the harrowing wartime experience.

Japan has protested against changing the government-to-government deal, saying any attempt to modify or scrap it could negatively affect bilateral relations between the neighbors.

Historians estimate that up to 200,000 women, mostly from Korea, were forced to work in front-line brothels for Japanese troops during World War II. Korea was under Japan's colonial rule from 1910-45. (Yonhap)