The meeting between Foreign Minister Kang Kyung-wha and Finnish Foreign Minister Timo Soini was held to discuss bilateral and global cooperation as well as the security situation on the Korean Peninsula.

Kang called for Finland's "sustained attention and cooperation" with regard to South Korea's push to open denuclearization talks with North Korea through the growing momentum for inter-Korean dialogue, created by the North's Olympic participation, the Ministry of Foreign Affairs said. 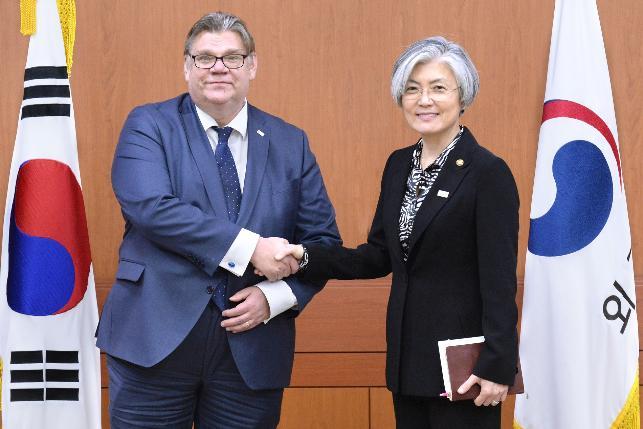 South Korean Minister of Foreign Affairs Kang Kyung-wha and Finnish Foreign Minister Timo Soini shake hands in Seoul on Thursday. Yonhap
Soini, in return, agreed on the importance of diplomatic efforts to ease tensions with North Korea and affirmed his support for the South's policy line on North Korea, the ministry said.

The two sides also agreed to further upgrade their cooperation in a range of fields, including defense manufacturing, Arctic development, cyber security and travel between their countries.

Kang extended her thanks for the Finnish government's interest and participation in South Korea's successful hosting of the Olympics. Before the foreign minister, Finland's Prime Minister Juha Sipila visited Korea for the Olympics.

"It was an opportunity to explore ways to enhance the two countries' cooperative relationship in celebration of the 25th anniversary of their diplomatic relationship this year," the ministry said. "It also reaffirmed their cooperation on the North Korea policy intended for peace and stability on the peninsula." (Yonhap)