“After all, the company is pressurizing the government … If the answers are not enough to satisfy them, the next step could be made,” said Rep. Kim Kwan-young of the Bareun Future Party in an interview with The Korea Herald on Wednesday, a day after he met Barry Engle, president of GM International at the National Assembly in Seoul.

“The next step could mean shutting down another plant. The company has two in Bupyeong and I heard the second one is in a difficult situation.” 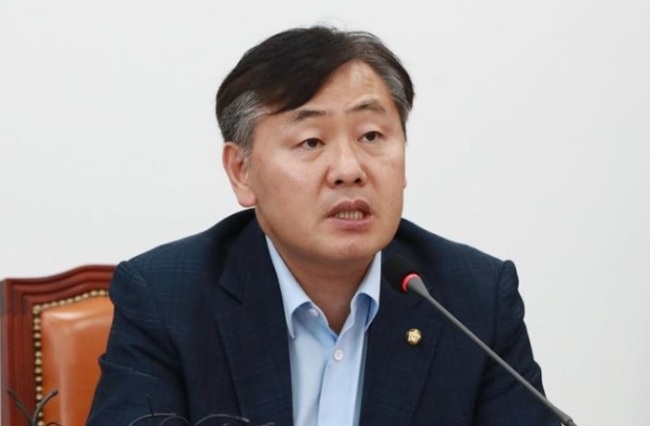 Rep. Kim Kwan-young of the Bareun Future Party (Yonhap)
In an emailed announcement last week, Engle said that the carmaker was going to make “important decisions on the next steps” by the end of February, urging key stakeholders, including the government and labor union, to make progress in ongoing discussions.

The GM deadline of the end of this month was seen as an “ultimatum” posed to the Moon administration ahead of the local elections in June, when jobs and wage issues will likely become a sensitive political issue.

In a closed-door meeting with Engle, Kim said he demanded GM reverse its decision, but that reviving the Gunsan plant was not even on the discussion table. Also, GM allocating two new cars, after closing down the Gunsan plant, appeared to be a bargaining chip for fresh investment by the government, he said.

The shutdown of the plant will hurt the local economy which is still suffering from last year’s departure of Hyundai Heavy Industries.

Unlike Engle’s estimation that only 10 percent of 5,000 workers at 22 suppliers for GM ‘s Gunsan plant would lose jobs, the impact of the decision to the local economy and nearby will be enormous.

Engle had told lawmakers that suppliers to GM Gunsan have other clients in and out of enough countries to sustain their businesses.

“He was being too much optimistic. If the plant closes, those suppliers would no longer have reason to stay in Gunsan. This is why (the departure of GM) would give tremendous impact to the city.”

According to sources, IS Tech, one of GM’s suppliers in Gunsan has already filed to liquidate its business. The company declined to comment.

The two-term lawmaker said GM failed to clarify on much of the speculations posed by the lawmakers.

None of GM’s officials gave direct comments on the suspicions of R&D spending or GM Korea paying high interest rates, he said. But Engle rejected rumors that GM Korea had been selling complete knock-downs at a lower price to the carmaker’s other affiliates.

“He said the products (made in Korea) are not cheap, and are even expensive that even Opel in Europe said they won’t purchase (GM Korea’s) products,” he said.

Attracting new investment will be key for Gunsan’s survival, he said. Plans on building an offshore wind power complex, turning Saemangeum, reclaimed land into a multi-purpose business area, and establishing a regulation-free zone has been approved. A tourism site related to a fashion business could be a fresh idea, he said.