“The factory boomed 5-6 years ago when we produced 1,200 units of Lacetti and Rezzo combined. The factory ran 24 hours. Back then Gunsan was a cash cow for GM,” said Jeon, a worker at GM’s Gunsan plant.

Despite the proud memories he has, Jeon couldn’t believe it when he first heard from his colleagues last week that the US carmaker will shut down the plant, saying that the company was losing too much money from Gunsan. The plant has been manufacturing mid-sized sedan Cruz and mini-van Orlando. Its capacity remained around 20 percent due to sluggish sales, the company said.

“We were all surprised … operation rate fell because new models weren’t allocated here. It was not our fault,” said Jeon. 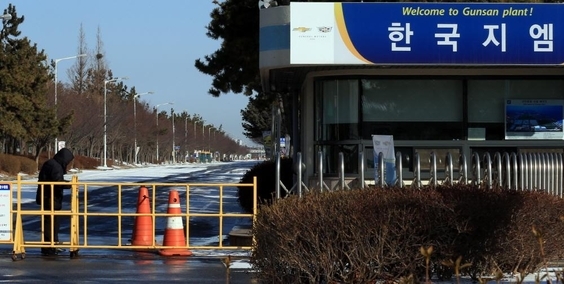 Front gate of GM plant in Gunsan, North Jeolla Province. (Yonhap)
What worries workers the most is the uncertainty over their financial situation as most of them are in their mid-40s, said a worker surnamed Lee.

“When the Gunsan plant opened in 1996, it hired a lot of workers in their mid-20 somethings. My child just turned 20 years old. I am most worried about his school expenses,” he said.

Both Jeon and Lee were attending a meeting held by the labor union at GM’s Gunsan plant on Wednesday.

Workers discussed what they could do to prepare for the future, as there appears to be a zero chance of GM reversing its decision. After the announcement last week, Barry Engle, president of GM International during a meeting with lawmakers on Tuesday reaffirmed its decision of leaving Gunsan and said it is ready to sell it off. It has also begun receiving applications for voluntary retirement not only from Gunsan but also from its two other plants in Bupyeong and Changwon with a deadline of March 2. Applicants will get 2-3 years of salary as a severance package, as well as programs to help them shift their career, the company‘s spokesperson said.

Despite the decision, most of workers still have hopes to continue their work at the factory or relocate to Incheon and Changwon where GM’s two remaining factories are, Lee said.

The two are among 2,000 workers hired by GM Gunsan. When adding workers at subcontractors and partner companies nearby, about 13,000 workers will lose their jobs said Rep. Kim Kwan-young, an elected lawmaker representing the city.

“If we think about their family members as well, more than 50,000, or 20 percent of the entire Gunsan population will be directly affected,” he said.

The former port city during the Japanese colonial era turned into a major industrial city of the nation’s southwestern region, housing a shipbuilding yard for Hyundai Heavy Industries and a car manufacturing plant for now-defunct Daewoo, before GM’s acquisition 15 years ago. 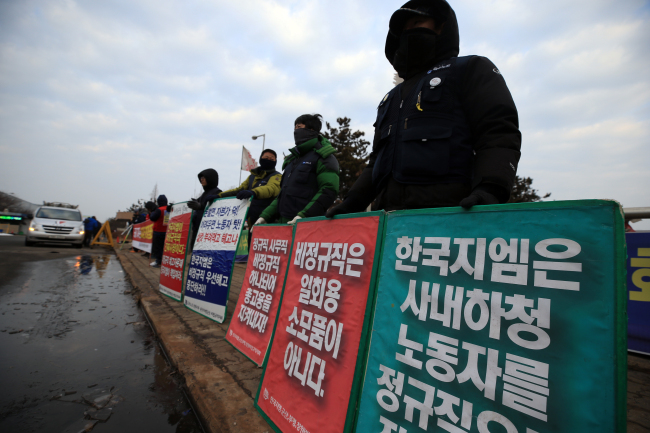 GM Korea's unionized labor protested against the company's annoucement to shut down the Gunsan plant at the east gate of the factory in North Jeolla Province . (Yonhap)
However, the unemployment rate at the city with a population of 280,000 already grew by nearly 1 percentage point in the second half from the previous half, according to Statistics Korea, largely affected by Hyundai Heavy’s departure. The shipbuilder closed its shipbuilding site last July amid a sharp drop in ship orders.

Not only workers but GM’s decision is also sending shockwaves to the community.

One-room apartments and restaurants have been vacant since Hyundai Heavy Industries pulled out, and the situation will be worse when GM exits Gunsan.

“There weren’t many shoppers at the Gunsan Shin Young market (a traditional local market) over the Lunar New Year holidays. The early morning market is also empty these days,” said Lee Mi-sook, a housewife.

The fate of Gunsan plant remains unclear even though the government is gearing up for efforts to secure jobs there. Cheong Wa Dae said on Tuesday that the city will be designated as a special employment crisis zone, to secure necessary fund and measures for workers afterward.

According to sources, the local government is considering turning Gunsan into a pilot industrial city for offshore wind power plants, to create new jobs for workers at Hyundai and GM.

Taking the next step from the so-called GM crisis is important for politicians and policymakers in the city as the general election takes place in June.

GM, for its part, has been moving fast, seeking a deal with the Korean government for it to inject fresh investment in exchange of a self-rescue plan and saving thousands of jobs.

Another Gunsan worker surnamed Kim, however, said he would not want the government to support GM with taxpayers’ money.

The 46-year-old worker who is gearing toward voluntary retirement, said the money will only buy time for the US carmaker. When the money dries out, the mentioning of departure would rise, he said.

“With government funding GM may operate here for a few more years. But who knows when GM will betray us.”