From a self-navigating cleaner bot vaguely resembling Star Wars’ R2-D2 to autonomous drink-serving robots and robotic fish swimming inside water tanks, South Korea’s service robots have been capturing the attention of Olympic guests from around the world.

Korea has deployed a total of 85 robots across 11 types at the PyeongChang Winter Games, aiming to give a high-tech spin to the international event and to flaunt the country’s robotic technologies to the world.

At the Main Press Center at PyeongChang, two large-sized cleaning robots can be seen whirring around the halls, sucking up dust from the carpet throughout the day. If you get too close, they warn you to move out of the way, though it’s hard to hear them over the noise. 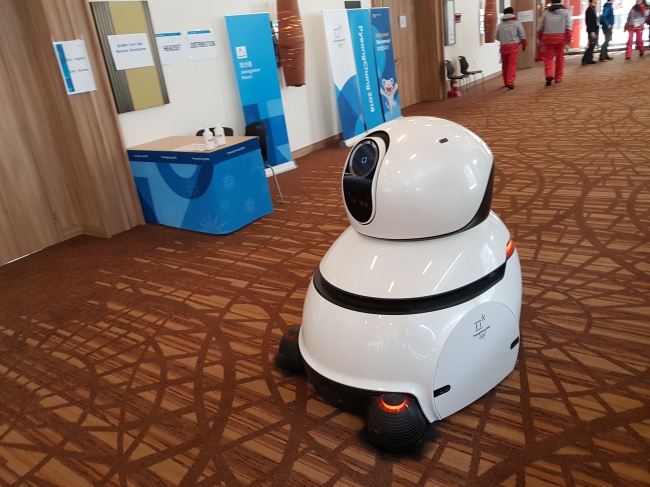 High-tech robots roam the premises of the Olympic venues. (Sohn Ji-young/The Korea Herald)
Amused visitors have been stopping by to take videos, with some deliberately getting in the way of the self-driving robots to see what they would do, while others snapped selfies with the bots.

“Foreign guests in particular have been showing a keen interest in the cleaning robots, taking pictures and asking questions,” a staff member running a corporate promotion kiosk located next to the whirring robots, told The Korea Herald.

“Because they aren’t used to seeing robots being used in their daily surroundings, many of the international visitors have been asking us whether this is typical in South Korea,” she added. 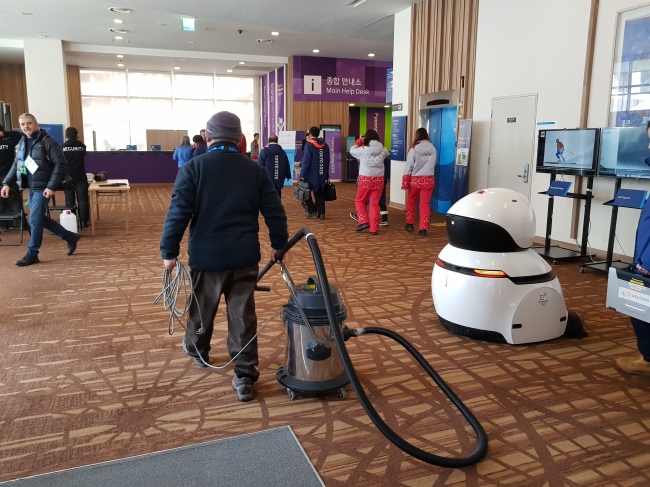 High-tech robots roam the premises of the Olympic venues. (Sohn Ji-young/The Korea Herald)
This doesn’t necessarily mean Korea has passed on integral service jobs like cleaning over to machines. Ironically, several cleaning staff were seen vacuuming at the halls alongside the bots — which move quite slowly to avoid collisions, and can cover only select portions of the hall.

Next to the robot cleaners, two drink-serving robots can be found making rounds at the MPC every day. Shaped like mini refrigerators, the bots self-navigate themselves to designated points. Upon arrival, they open their flaps, revealing free bottles of water for guests to take.

After taking a bottle, a person can press the “O” button to send the robot back on its path toward the next serving point. After finishing its run, the robot automatically returns to its charging port in the corner.

According to their developer, these drink-serving bots are operated via a visual navigation technology called three-dimensional simultaneous localization and mapping, also known as 3-D SLAM.

“The robot uses its camera to scan its surroundings and chart out a map. Using this spatial data, it self-navigates itself to its three designated locations,” said the drink-carrying bot’s developer who was present at the scene. He declined to be identified as the robots are considered a property of the International Olympic Committee. 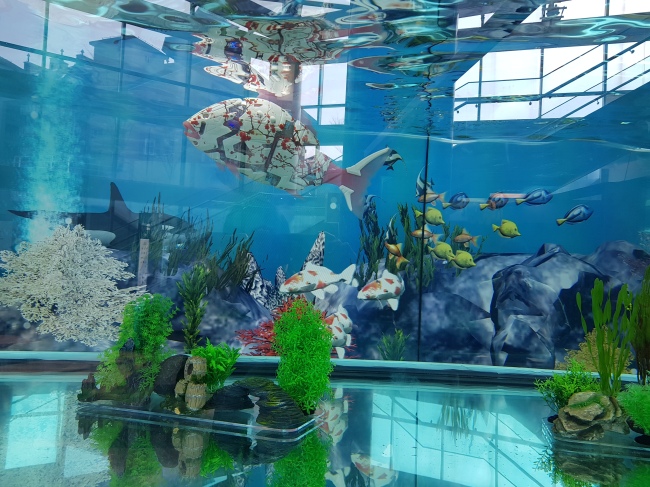 High-tech robots roam the premises of the Olympic venues. (Sohn Ji-young/The Korea Herald)
At the indoor Olympic stadiums, visitors can run into conversational guide bots that look like the PyeongChang Olympics mascot Soohorang. The Soohorang bots were often seen surrounded by crowds of curious kids.

While not offering much practical assistance, robotic fish swimming inside real water tanks have also become a major spectacle among Olympic visitors. They are located at the MPC and the Super Store in Gangneung that sells PyeongChang Olympics merchandise, among other places.

Modeled on the Koi and sea bream, the robotic fish can recognize obstacles and swim in water up to 5 meters deep for up to 30 hours on a single charge. Though their purpose now stops short of entertaining people, the robotic fish will assume more practical roles in the future.

That includes installing cameras and sensors inside the fish to check for water quality, as well as other real-time underwater tasks best suited for machines with fish-like qualities. 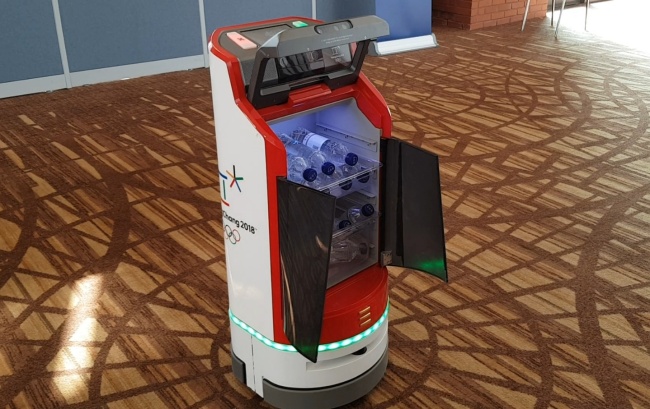 High-tech robots roam the premises of the Olympic venues. (Sohn Ji-young/The Korea Herald)
Other robots in use at the Olympics include moving bots that project the day’s news and weather onto the floor as well as wall-painting robots able to create complex murals on-demand based on certain inputted topics.

The robots at the PyeongChang Olympics were all developed by Korean tech companies and research institutes. However, information about their origins are not revealed in accordance with IOC policies that protect the rights of Olympic sponsors and partners.

In an extension of its robotics push, South Korea also hosted last week a humanoid robot ski tournament in a local ski resort in Hoengseong on the sidelines of the Olympics.