Six out of ten South Koreans think the two Koreas should hold another round of bilateral summit talks, a poll showed Thursday, amid an inter-Korean rapprochement driven by the Olympic Games currently under way in PyeongChang.

According to the Realmeter survey of 500 adults nationwide, 61.5 percent were in favor of a meeting between President Moon Jae-in and his northern counterpart Kim Jong-un. 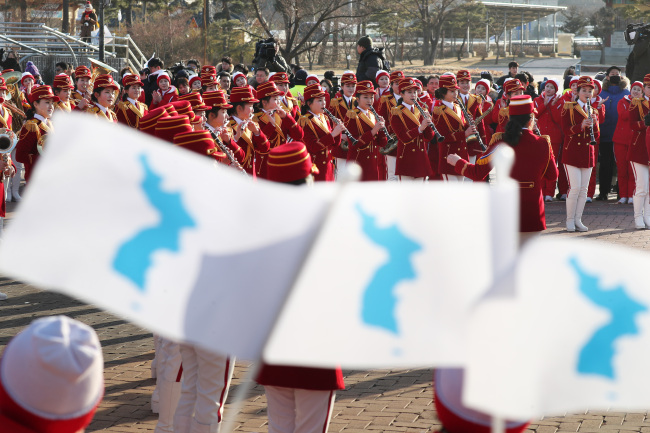 North Korea`s female cheerleading squad stages a performance in Gangneung, Gangwon Province, on the sidelines of the PyeongChang Winter Olympics, Wednesday. (Yonhap)
Only 31.2 percent opposed a summit, citing the need to prioritize sanctions and pressure on the nuclear-armed communist neighbor, while 7.3 percent remained neutral.

The poll was conducted on Wednesday and was commissioned by tbs, a local radio station. The margin of error is plus and minus 4.4 percentage points.

The survey came as the two Koreas prepare for the follow-up to the North‘s participation in the Olympics and a visit here by its high-level delegation led by Kim Yong-nam, the nation’s ceremonial head of state.

The delegates included Kim Yo-jong, the influential and only sister of Kim Jong-un.

Introducing herself as his special envoy in a meeting with the South Korean president last week, she delivered her brother‘s invitation to Moon to visit Pyongyang.

If realized, it would set the stage for the first inter-Korean summit since 2007. The two sides held the first summit talks in 2000, which led to various joint economic and other cooperation projects such as the now-defunct industrial complex in Kaesong and a tourism program to Mount Kumgang in the North’s eastern region. (Yonhap)