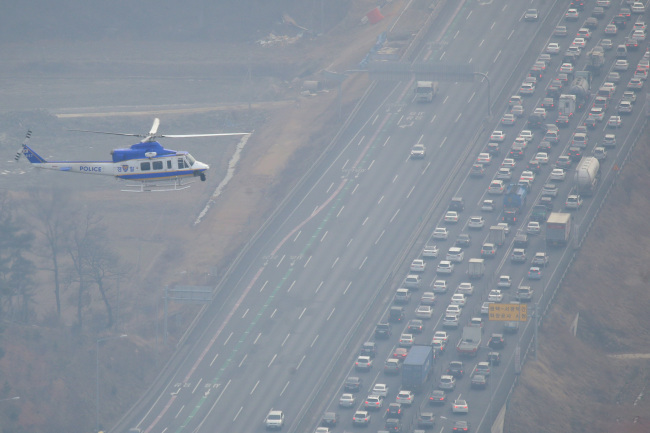 Yonhap
Hundreds of thousands of cars are leaving Seoul and nearby Gyeonggi Province, and bus terminals, train stations and airports are crowded with people heading to their hometowns, according to Korea Expressway Corp.

"Traffic jams on expressways are expected to peak around at noon and ease starting at 7-8 p.m. today," a company official said.

Hitting the road from Seoul, it will take nearly eight hours to get to Busan, far longer than on a normal weekday, when it should take around five hours.

Seol, or Lunar New Year's Day, falls on Friday this year. It's one of the biggest annual celebrations for Koreans, along with Chuseok, the equivalent of Thanksgiving in the United States.

The government has designated the Seol holiday season a "special traffic measure period."

There will be 1,863 more express bus services and 71 more train services across the nation, along with 27 additional flights and 168 more ferry services, according to Ministry of Land, Infrastructure and Transport. (Yonhap)