[ The Korea Herald – Send E-mail ]
GM to shut Gunsan plant, raising fears of complete withdrawal
US carmaker to make another 'important decision' by Feb., government expresses 'deep regret'
By Cho Chung-un
Published : Feb 13, 2018 - 09:57
Updated : Feb 13, 2018 - 18:25
General Motors’ made a widely anticipated decision to permanently close its plant in Korea’s southwest on Tuesday, prompting the Seoul government to express regret and up the pressure on it to normalize its business here.

The move is the first concrete action that points to GM’s speculated upon withdrawal from the country.

Calling it the “first step for necessary restructuring,” GM Korea said it would stop production and close its plant in Gunsan, North Jeolla Province, by the end of May.

GM’s Gunsan plant manufactures the carmaker’s midsize sedan Cruz and sport utility vehicle Orlando. The plant employs about 2,000 workers and has more than 10,000 others working at subcontractors nearby. 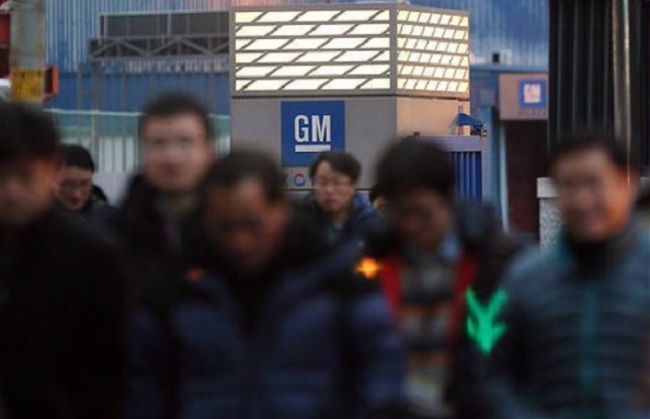 Production at the plant has remained at under 20 percent of capacity over the past three years. The decision was carried out as part of efforts to restructure the money-losing business, the company said.

“This is a necessary but difficult first step in our efforts to restructure our operations in South Korea,” said Kaher Kazem, president and CEO of GM Korea. “We recognize the contribution and support of our employees, the wider Gunsan and Jeonbuk communities and government leaders, particularly through the most recent difficult period.”

In an emailed announcement, Barry Engle, president of GM International, added that the carmaker was going to make “important decisions on next steps” by the end of February, urging key stakeholders, including the government and labor union, to make progress in ongoing discussions.

The GM deadline of the end of this month was seen as an “ultimatum” posed to the Moon administration ahead of the local elections in June, when jobs and wage issues will likely become sensitive political agenda.

GM Korea employs around 16,000 workers around the country, including at its Gunsan plant. If GM pulls out of the country, it could hurt the wider local economy, as its businesses involve thousands of subcontractors and partners.

The Korean government, meanwhile, expressed deep regret over GM’s “unilateral” decision, but said it will have the Korea Development Bank work with GM to study the situation at the business. The government will continue talks with the US carmaker to normalize its business here, considering “the impact on jobs and the regional economy.”

Related ministries were flustered, as they said they were informed by GM Korea of the decision only a few hours before the announcement was made Tuesday morning. The government was expecting GM to propose a restructuring plan, not announce a decision to shutter a major plant, an official said.

The government may have to comprehensively review the carmaker’s request to support its business, after GM comes up with a fresh investment plan for its South Korean unit, Industry Minister Paik Un-gyu told reporters in the afternoon.

“But we may have to check the carmaker‘s direction of the restructuring plan as well as transparency of its management before making any decision,” he said.

According to media reports, GM had asked for government support to help it increase capital by acquiring newly issued stocks, which would cost some 500 billion won ($460 million). The state-run KDB is GM Korea’s second-largest shareholder with 17.02 percent stake.

A GM Korea executive, however, denied that the US carmaker was sending an ultimatum to pressurize the government.

“This is basically a part of a restructuring plan to go profitable, not an ultimatum,” Dale Sullivan, vice president of GM Korea, told The Korea Herald in a telephone interview.

GM stated the timing for an important plan by February is not about the US carmaker pulling out of the country. It meant “GM’s obligation on certain things” such as making a decision on what products it will allocate and what financial matters it has to fix as in “mutual” decision between GM Korea and its head office, he added.

Since entering the market in 2002, GM Korea has manufactured 10 million vehicles here. Amid a sharp rise in labor and intense market competition, GM Korea posted 1.9 trillion won in net losses between 2014 and 2016.