[ The Korea Herald – Send E-mail ]
[Herald Interview] ‘Sri Lanka sweet spot of Seoul’s New Southern Policy’
“Sri Lanka hopes to leverage its location advantages and emerge as a regional economic hub by developing a network of ports as well as services based on logistics, transport, the financial sector and blue economy.”
By Joel Lee
Published : Feb 5, 2018 - 18:25
Updated : Feb 8, 2018 - 16:20
Sri Lanka, an island nation located at the heart of the Indian Ocean, looks to Korea for greater synergies as South Asia and East Asia increasingly engage each other based on their complementary needs, says the country’s top envoy to Korea.

Their mutual pivot culminated when Sri Lankan President Maithripala Sirisena visited Korea from Nov. 28-30 last year, the year of the two countries’ 40th anniversary of diplomatic relations. Feb. 4 this year is the 70th anniversary of Colombo’s independence from colonial Britain. 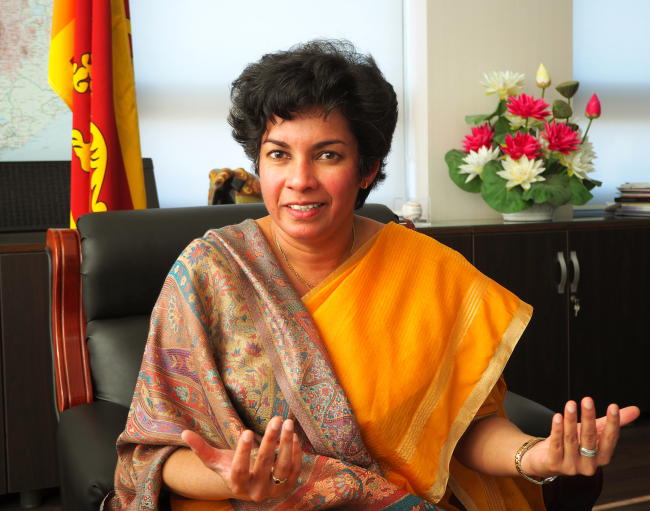 Sri Lankan Ambassador Manisha Gunasekera (Joel Lee/The Korea Herald)
“Sri Lanka at the southern tip of the Indian subcontinent is one of the world’s fastest growing, dynamic economies. It is also endowed with vast ocean resources,” said the envoy at the embassy in Seoul. “Sri Lanka has served as a hub connecting East and West since ancient times. In modern times it hopes to leverage its location advantages and emerge as a regional economic hub by developing a network of ports as well as services based on logistics, transport, the financial sector and blue economy.”

Noting that the island country is situated on the East-West shipping route, which is also the world’s busiest sea route, Gunasekera said Sri Lanka vies to play a weighty role in international logistics and transport via the Colombo Harbor, a leading port in South Asia that handles most transshipments from India and serves over 33 major shipping lines.

“We are also well located for air connectivity and can serve as a hub between Dubai and Singapore,” she continued, adding Colombo has free trade agreements in force with India and Pakistan and is discussing one with Bangladesh. An FTA with China is currently under negotiations.

Sri Lanka signed an FTA with Singapore on Jan. 23. It is a “comprehensive and forward-looking FTA” encompassing trade and investment, including advanced services. 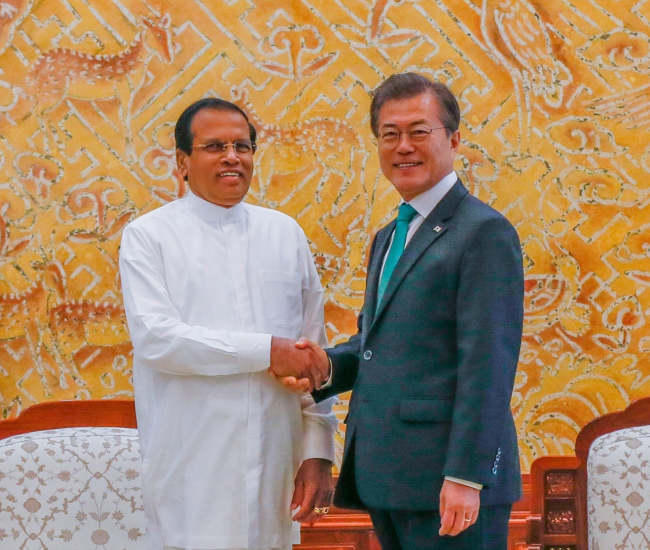 During the Sri Lankan president’s visit, the two governments signed an agreement to increase Seoul’s Economic Development Cooperation Fund for the 2017-2019 period from $300 to $500 million. The concessionary loan is used to develop projects that are reflective of Korea’s technological advancement, she expounded, citing infrastructure, smart city, renewable energy, human resource development, public administration, agriculture, education and other large-scale industries. Sri Lanka is the third-largest recipient of Korea’s official development assistance out of 52 developing countries.

“Korea’s ODA can play a complementary role to Korean foreign direct investments into Sri Lanka,” said the diplomat. “Korean companies engaged in infrastructure development in Sri Lanka using the ODA have also tapped into other business and investment ventures.”

The bilateral trade volume reached nearly $373 million in 2016, according to the Korea Trade-Investment Promotion Agency.

Sri Lanka looks to diversify its exports to Korea beyond apparels, coconut products and rubber products, noted the ambassador. “Sri Lanka is keen to be Korea’s partner in the global supply chain, especially in automobile and electronics products.” 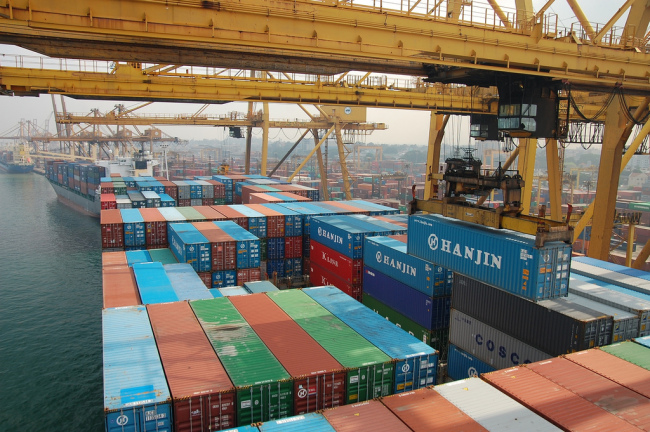 Port of Colombo (JGMORARD)
Gunasekera mentioned several key urban development and infrastructure projects in her country. One is the Western Region Megapolis Planning Project, which is designed to develop the greater Colombo urban area home to 8.5 million people as a “megalopolis.”

The whole scheme is valued at $40 billion and will be implemented over a 15-year period through public-private partnerships. Ten thematic areas have been identified under the initiative’s master plan, encompassing transport, energy, waste management, science and technology, smart city and aero-maritime trade, among others.

The master plan for Tech City Homagama was prepared by Korean experts and launched in November last year through the Korea Land and Housing Corporation, which is also involved in planning the Katunayake Aero City.

Other major initiatives are the Colombo International Financial City -- valued at $1.5 billion and built on a 560-acre reclaimed land adjacent to the Colombo Port -- and the development of the Hambantota International Port in southern Sri Lanka merely 10 km from the main maritime route connecting East-West shipping routes. 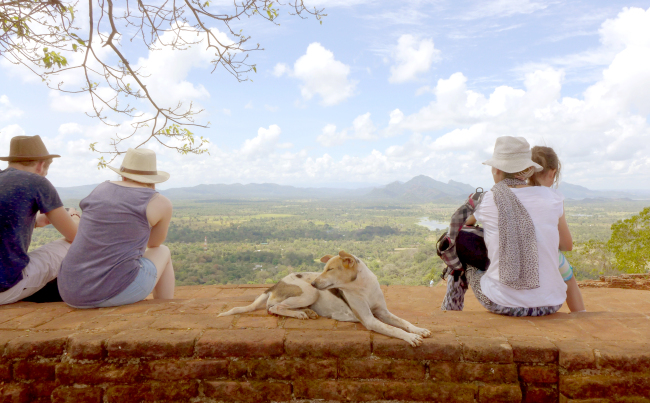 “Our Buddhist heritage in ancient cities and sites is very interesting to Korean tourists who appreciate culture and aesthetics. We offer a unique tourism experience with a combination of our 2,500-year-old civilization, trading history, beautiful colonial architecture, cosmopolitan markets and a range of cuisine and culture.”

The number of Koreans traveling to Sri Lanka nearly quadrupled to some 16,000 from 2010 to 2017, as the country works to promote itself as a high-value tourism destination, according to the embassy.