Australia will strengthen its partnership with Korea, a country of “first order importance to Australia” as outlined in its recent Foreign Policy White Paper, he emphasized at a reception marking Australia Day in Seoul on Friday.

“One of Australia’s greatest strengths is our openness to the world,” the envoy said at the event, which also celebrated the Australian Chamber of Commerce in Korea’s 10th anniversary and honored its annual business awardees. 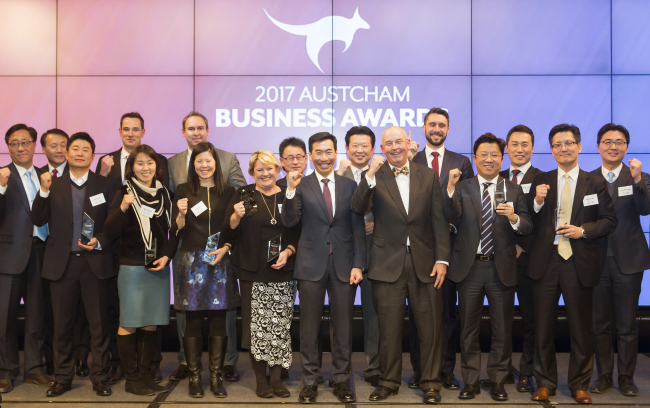 Participants pose at the AustCham Korea’s Business Awards Night in Seoul on Friday. In the picture are Australian Ambassador to Korea James Choi (center) and AustCham Chairman Graham Dodds (front, third from right). (Australian Chamber of Commerce in Korea)
“Australia’s interests are intertwined with our immediate region -- the Indo-Pacific. But as the 13th-largest economy, we are also engaged with the world. Australia and Korea recognize that open markets improve competitiveness, generate jobs and provide access to new ideas and innovations.”

Mentioning the Australia-Korea free trade agreement that entered into force on Dec. 12, 2014, the Korea-born diplomat said the accord has enabled businesses to thrive, including the ones recognized at the venue. Fourteen companies and individuals were awarded for their excellence in finance, innovation, agriculture, education, tourism and others, including Macquarie Capital Korea, IFM Investors, Samsung Asset Management, Wilson Parking Korea, The Sool Company, Jin Air, Tafe Queensland, Posco and ReClean Holdings.

“Your partnership not only provides value to our business relationships, but also contributes to our people-to-people links,” the ambassador said. “Australia is a nation that prides itself on inclusion and tolerance. We believe in democracy and egalitarianism.” 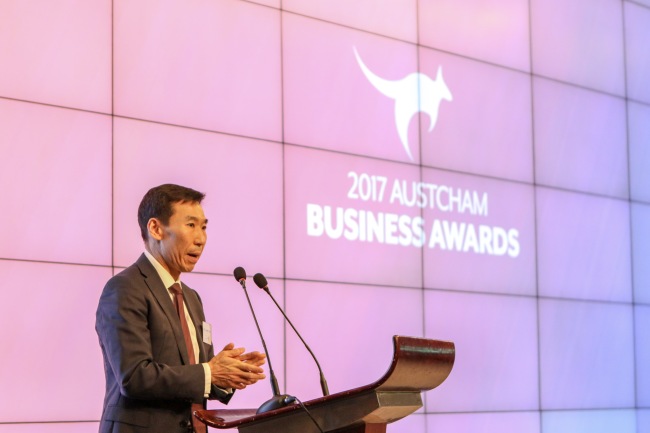 Australian Ambassador to Korea James Choi (AustCham)
Australia is “a nation both old and new,” he highlighted, adding the Australian society comprises of people tracing their backgrounds to nearly 200 different countries, faiths and cultures. “My family’s migrant story, like the stories of other immigrants from Korea and from around the world, is a part of the narrative of the modern Australian nation.”

“The Korean government is focused on providing opportunities for the youths and increasing the employment of young people. We have a similar priority in Australia,” Dodds said. “Our technical and further education system has proven to be an outstanding pathway to employment. The competency-based training provides assurance to employers that TAFE graduates have demonstrated the skills necessary to succeed in the workplace.”

The businessman gave credit to various Australia firms, including those with advanced technologies in recycling, medical equipment and electronic parking. 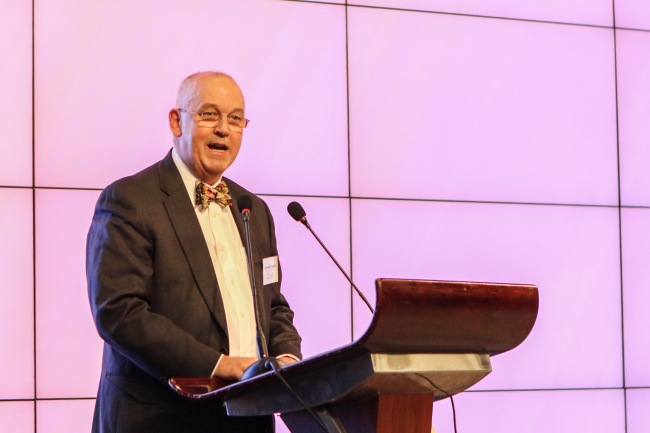