Chongryon, a pro-Pyongyang association of Korean residents in Japan, is stepping up work to create a cheering squad for North Korean athletes who will take part in South Korea's Winter Olympics, sources well-versed in the organization said Wednesday.

The South Korean government promised to guarantee the safety of the Chongryon cheering squad, during its recent talks with the North on its participation in the Olympics.

The size of the cheering group has been set at around 170 people, and it can be expanded if there are many applicants, the sources said. 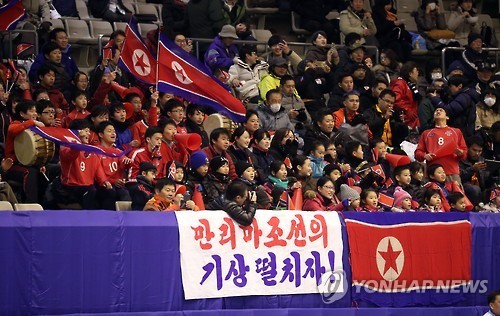 (Yonhap)
The Tokyo-based organization is likely to send the squad to the sporting event in three phases by dividing it into three groups, according to the sources, adding that each group will stay near the venues for Olympic events for about a week.

Chongryon is currently in consultations with the South Korea Embassy in Japan for the squad's entry into the South, the sources said.

Chongryon members are required to get travel certificates, instead of visas, in advance for their entry, as their nationalities are "Chosun," meaning they are categorized as "stateless."

The South Korean Foreign Ministry issues the travel certificates within eight days of the application date under ordinary conditions.

The North will send 22 athletes, a 140-member art troupe and a 230-strong cheering group to the PyeongChang Olympics and Paralympics, set for Feb. 9-25 and March 9-18, respectively. (Yonhap)