One day before the opening of the PyeongChang Olympics in South Korea on Feb. 9, a large military parade is likely to be held in Pyongyang, as the communist state has decided to celebrate the founding day of its armed forces on Feb. 8.

The Political Bureau of the ruling Workers’ Party of Korea’s Central Committee announced Monday the decision to mark Feb. 8 as the founding anniversary of the Korean People’s Army, according to the state media outlet Korean Central News Agency.

“Feb. 8 is a historic day when the Korean People’s Revolutionary Army developed into the regular revolutionary armed forces to declare the birth of the KPA,” the KCNA said. “Feb. 8 will be marked as the Army-Building Day.” 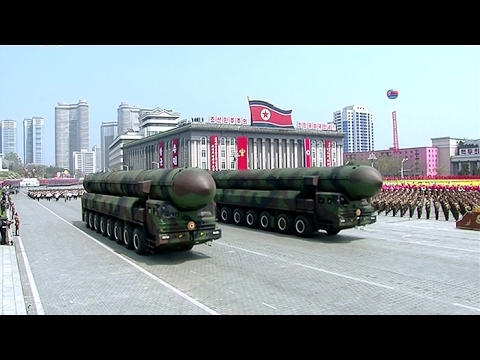 Two vehicles carrying what appeared to be ICBM-class missiles were present during a military parade in Pyongyang in April 2017. Youtube
North Korea’s founder Kim Il-sung -- the grandfather of current leader Kim Jong-un -- created the Korean People’s Army on Feb. 8. The North had marked Feb. 8 as the army’s founding day until the late 1970s, before changing it to April 25, the date when Kim Il-sung allegedly organized anti-Japan guerilla forces in 1932.

The KCNA said “diverse events” are scheduled to glorify the North’s founding father and “practical steps” are underway to mark the occasion, with growing signs that North Korea has stepped up its efforts to hold a military parade in time for the event.

An anonymous government source told Yonhap News Agency on Tuesday that signs of a military parade and air show have been identified at Mirim airfield in Pyongyang, where North Korea has conducted trainings for military parades.

“About 13,000 troops and 200 military equipment appear to have been mobilized, we have identified indications of a military parade.” said the source. “The number of troops and equipment have increased compared to earlier last month.”

A temporary motor pool for storing vehicles and equipment was spotted as well, but no clear evidence of large numbers of very heavy vehicles designed to carry intercontinental ballistic missiles, which were present in previous military parades, the website said.

During the latest military parade on April 15 last year, North Korea showcased what analysts called “frankenmissiles,” which appeared to bear the characteristics of both the North Korean ICBM-class KN-08 and KN-14 missiles.

South Korea’s Joint Chiefs of Staff spokesperson Col. Roh Jae-chun said there were no precedents where North Korea held massive military parades on Feb. 8, adding the military would continue to monitor activities in the North.

Kim Dong-yup, a professor at Kyungnam University’s Far East Institute, said North Korea is likely to hold a military parade on Feb. 8, the first of such event since the North declared completion of a nuclear power with its launch of Hwasong-15 ICBM on Nov. 29.

“As North Korea announced it would hold various events to mark the army’s foundation day, I think there will be a military parade. It will be worthwhile to watch what it would bring -- something new -- to the event.” Kim said.