[ The Korea Herald – Send E-mail ]
[Weekender] Grab-n-go snacks lure commuters at Korea’s subway stations
By Sohn Ji-young
Published : Jan 12, 2018 - 14:40
Updated : Jan 12, 2018 - 14:40
Every morning, the smell of freshly baked pastries fills the air of the underground corridors connecting Line 2 and Line 4 of Sadang Station in Seoul. The pleasant smell is enough to make even the busiest Seoulite stop for a moment for a quick bite to-go.

Such is the case for 30-year-old Lee Hye-in, who was waiting in line to make a purchase at the bakery inside Sadang Station on Wednesday. 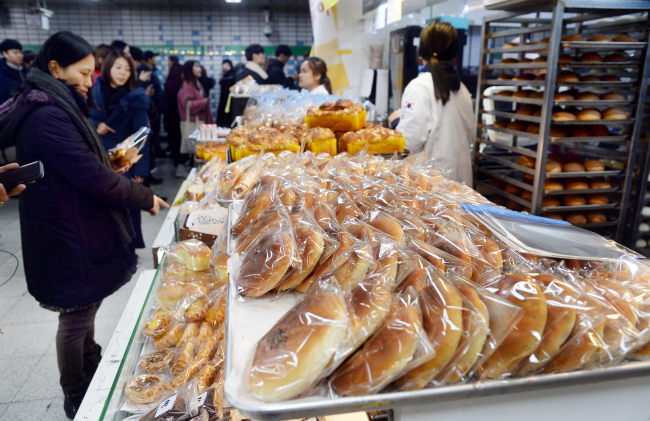 Various breads are on display at a bakery inside Sadang Station (Park Hyun-koo/The Korea Herald)
“I stop by this place every morning to grab something on my way to work -- usually a coffee bun or a sweet red bean paste pastry,” she said.

“The products here are really tasty, easy to eat on the move and really affordable. They make for a nice, fast breakfast during the hectic morning hours.”

Lee is just one of South Korea’s many commuters fueling the expansion of independent bakeries targeting time-strained morning and evening commuters inside Korea’s busy subway stations.

The in-station stores, run by individual business owners or franchise brands, offer an array of baked goods that can be downed in a few bites, whether it be a cream cheese bun, soboro bread, mini loaves, doughnut or muffin, typically priced at between 1,000 won and 3,000 won (94 cents to $2.80) each.

Many of the stores can be found in transit stations with heavy foot traffic, such as Jamsil Station and Seoul National University of Education Station, where as many as five to six bakeries compete for customers clustered together. 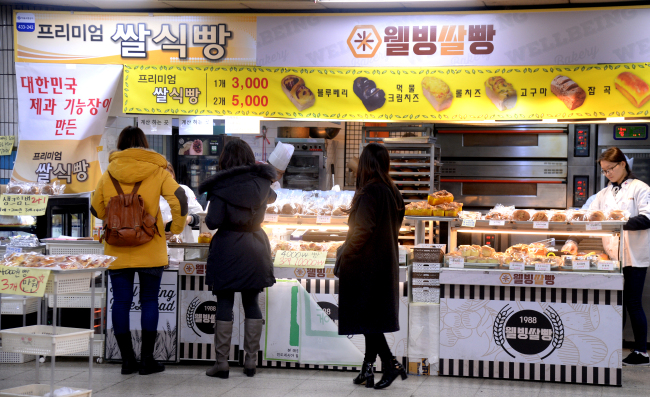 A bakery inside Sadang Station (Park Hyun-koo/The Korea Herald)
According to data provided by Seoul Metro, operator of Seoul’s Lines 1-8, there are 1,458 stores operating inside stations for the eight lines. Of them, 264, or around 18.1 percent, sell baked goods.

According to MPK Group, it operates 31 Manoffin outlets inside Seoul’s busiest subway stations, including Gangnam, Gyeongbokgung and Myeong-dong stations. Most purchases at Manoffin take place from 7 to 10 a.m., with customers in their 20s and 30s commuting to work.

Dunkin’ Donuts runs some 60 locations at subway stations in the Seoul metropolitan area, Busan and Daegu, according to SPC Group. Sales peak at from 7 a.m. to 9 a.m., then again between 6 p.m. and 8 p.m.

“Breakfast items like bagels, hot sandwiches and coffee are most popular among commuters in the morning hours, while doughnut packs are popular in the evening when commuters are heading home,” SPC Group said.