PYEONGCHANG, South Korea -- The 2018 Winter Games host city of PyeongChang on Wednesday reaffirmed its readiness to host North Korea at the competition held south of the border, with Pyongyang expressing interest in participation.

Lee Hee-beom, head of the 2018 Olympic organizing committee, said PyeongChang had been "preparing for a long time" for the possibility that North Korea would take part in the quadrennial event.

"We're making preparations in case North Korea sends its athletes, cheering squad and support staff," Lee said in a New Year's address delivered at PyeongChang Olympic Stadium, the venue for the opening and closing ceremonies for the Feb. 9-25 Olympics. 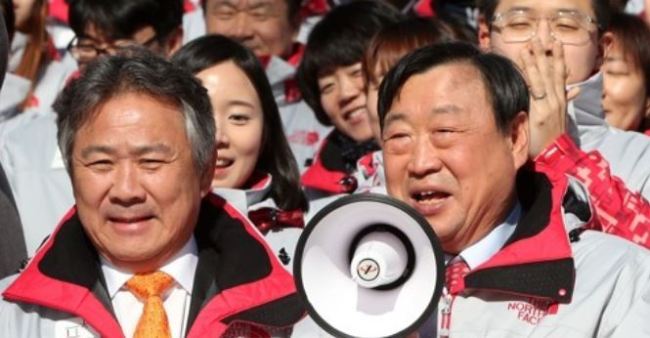 Lee Hee-beom (R), head of the 2018 PyeongChang Winter Olympics organizing committee, gives his New Year`s message at PyeongChang Olympic Stadium in PyeongChang, Gangwon Province, with Lee Kee-heung, president of the Korean Sport & Olympic Committee, next to him on Jan. 3, 2018. (Yonhap)
"The International Olympic Committee has also said several times that it would support North Korea's participation."

On New Year's Day, North Korean leader Kim Jong-un said he would consider sending a delegation to PyeongChang 2018, the first Winter Olympics to be held in South Korea, and he was open to having talks with Seoul over that issue. Lee already declared on Monday that PyeongChang had been preparing itself for the possibility that North Korea would participate.

The following day, South Korea proposed high-level talks with the North. Then on Wednesday, North Korea said it will reopen the suspended inter-Korean communication line at the shared border village of Panmunjom later in the day, though it has yet to accept South Korea's dialogue offer.

Against this backdrop, Lee said PyeongChang will be able to come up with more concrete plans depending on the progress of inter-Korean talks.

Meanwhile, the Korean Sport & Olympic Committee once again raised the possibility of assembling a joint Korean team during the Olympics.

"Talks of a unified Korean team may be premature now," said KSOC President Lee Kee-heung, also present at PyeongChang Olympic Stadium. "But if North Korea sends its delegation, we'll leave all possibilities open and try to ensure the Olympics' success."

Sports Minister Do Jong-hwan first discussed forming a joint team in women's hockey, though it was rejected by critics who questioned the idea's feasibility. For one, adding North Korean players to the current South Korean team would have to come at the expense of players from the host nation, who have played at international tournaments and faced some tough opponents in friendly games in their Olympic preparations. North Korea, on the other hand, didn't even try to qualify for PyeongChang.

There is also the issue of building chemistry in such a short period of time. The South Korean players have been competing and practicing together for years, and the forward lines and defensive pairings have mostly stayed intact. Disrupting their chemistry to push a peace agenda at the Olympics won't sit well with the athletes.

Aware of the cons, Lee Kee-heung said, "We'll talk with the IOC and try to find ways to build a unified team without sacrificing athletes who've been working so hard." (Yonhap)