The International Olympic Committee on Wednesday welcomed the interest taken by the two Koreas in having talks on the North's participation in the upcoming Winter Games south of the border.

In a statement emailed to Yonhap News Agency on Wednesday, IOC spokesman Mark Adams said, "The IOC welcomes the mutual intentions of the governments of the Republic of Korea and the Democratic People's Republic of Korea to start direct talks about the participation of athletes from DPRK in the Olympic Winter Games PyeongChang 2018."

He was referring to South Korea and North Korea by their official names.

Adams' statement came in light of North Korean leader Kim Jong-un's New Year's Day address, in which he declared his interest in sending a delegation to PyeongChang 2018 and in having talks with Seoul over the issue. The following day, South Korea proposed high-level talks for next Tuesday.

"In this context, the IOC continues its discussions with the (National Olympic Committee) of DPRK," Adams continued. "To allow for such a participation in respect of the Olympic Charter, the IOC is keeping its invitation for a delegation of NOC of DPRK open and will take the final decision in due time." 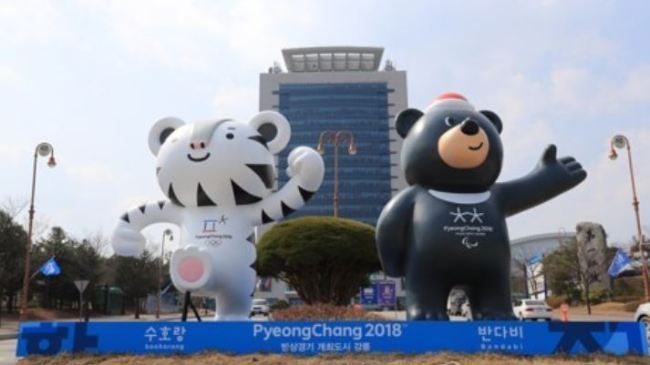 Soohorang (L) and Bandabi, the official mascots of the 2018 PyeongChang Winter Olympics (Yonhap)
IOC President Thomas Bach has gone on record as saying that the IOC has invited North Korea to participate in PyeongChang 2018 and that it will offer support if necessary.

Then in his New Year's message, Bach said the IOC has addressed political tensions on the Korean Peninsula "through close contact with the leaders of governments and NOCs concerned."

"In all these discussions, the Olympic Winter Games PyeongChang 2018 were never put in doubt. On the contrary, we feel support for our position that the Olympic Games must always be beyond all political division," Bach said. "The Olympic Games are about dialogue. They are a symbol of hope and peace. In our troubled times, they are the only event that bring the whole world together in peaceful competition. To ensure this for the Olympic Winter Games PyeongChang 2018, we keep monitoring the situation very closely."

PyeongChang's organizers have said they have already been preparing for North Korea's possible participation in what will be the first Winter Olympics to take place in South Korea. The North didn't participate in the first Summer Olympics held in the South, the 1988 Seoul Olympics. (Yonhap)