The winner of the 2017 Players Championship, Kim said he's spent much of the winter working on his conditioning so he could better survive the grind that is the PGA Tour.

"Last winter, I didn't prepare as much as I should have, and it led to some injuries early in the year," Kim said at Namseul Country Club here in Seongnam, just south of Seoul, where he made a donation to a local golf development fund.

Kim, 22, is scheduled to play at the Sentry Tournament of Champions in Hawaii starting on Jan. 4. 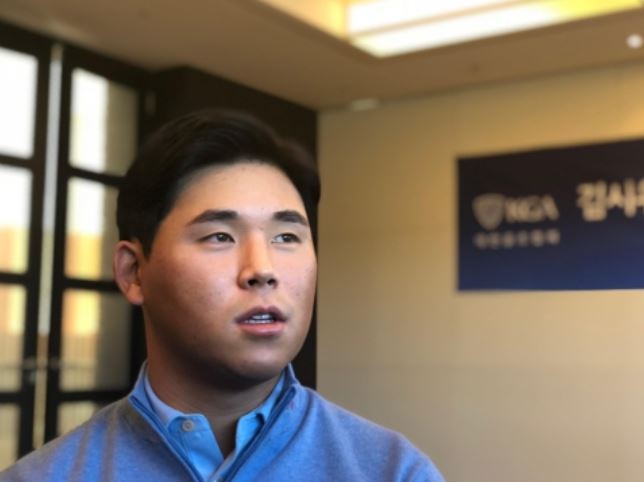 South Korean PGA Tour player Kim Si-woo speaks to reporters at Namseoul Country Club in Seongnam, Gyeonggi Province, on Dec. 21, 2017. (Yonhap)
Kim, who earned his PGA Tour card for 2016, has two victories so far, the biggest coming at the Players Championship -- dubbed the fifth major on the tour -- in May this year. At 21, he was the youngest winner of the Players Championship.

Kim spoke of how his career changed dramatically after that monumental victory.

"Early in my career, I mostly played with other young guys, but after that win, I started getting paired with some big names," he said. "And I remember getting more nervous in some other tournaments than I was at the Players Championship."

Kim said he tried to learn from different players each time he was paired with them.

"I've played with Phil Mickelson four times, and just looking at his short game, I realized just how far I had to go," Kim said of the five-time major champion known for his mastery around the greens. "And I've learned quite a bit about driving from playing with Justin Thomas, Jason Day and Dustin Johnson."

"Since I've prepared so hard for 2018, I'd like to finish the season without any injury," he said. "And since I've now experienced all four majors, I'll try to play more aggressively at the big events this season.

Kim added he's looking forward to meeting Tiger Woods on the tour. The former world No. 1 has fallen on hard times of late while battling back issues, but returned to action earlier this month.

Kim said he first met Woods at the Presidents Cup this fall, and added he could be perhaps paired with Tiger in the first round at the Players Championship as the defending champ.

After winning the Players, Kim pledged to make donations to help grow golf in his native country at the grassroots level. And he put that into action Thursday with a donation of 100 million won ($93,000).

"I wanted to make it big quickly so that I'd be able to help underprivileged people and young golfers," Kim said. "I hope I can make a difference, no matter how small." (Yonhap)