BUSAN -- South Korean mixed martial arts fighter Kang Kyung-ho said Thursday he is ready to give his all in his comeback bout next year.

Kang will have his first bout since September 2014 when he faces Guido Cannetti at the Ultimate Fighting Championship Fight Night 124 in St. Louis, Missouri, on Jan. 14. He is one of two South Koreans at the UFC competition with Choi Doo-ho, who will take on Jeremy Stephens in a five-round main event.

Kang was discharged from his military service earlier this year. The 30-year-old bantamweight fighter said he was eager to make a comeback after watching Choi's performance last December. Choi lost to Cub Swanson then, but his bout was voted the UFC Fight of the Year. 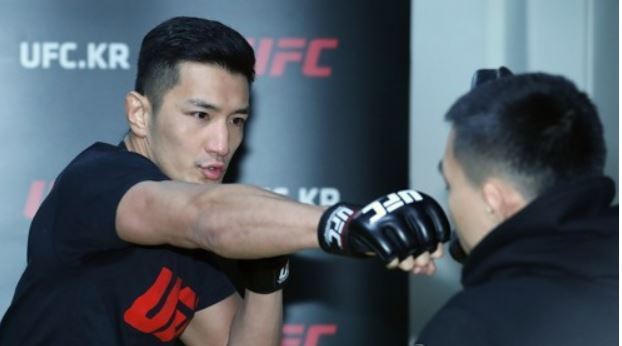 South Korean mixed martial arts fighter Kang Kyung-ho (L) practices at Team MAD gym in Busan on Dec. 20, 2017. (Yonhap)
"Choi's match drove me crazy," he said at a media event in Busan. "I want to let my desperation burst in the fight. I want to feel the excitement of a victory again."

Kang, who has 13 wins and seven losses in MMA fighting, said he has worked hard to improve his weaknesses for about a year after he finished his military service.

"In the past, I lost too much energy in the first round because I wanted to finish the fight early, and that's why I had problems later," he said. "This time, I worked hard to manage the bout wisely."

Kang, nicknamed "Mr. Perfect," said he doesn't feel like he had such an extended hiatus.

"I've never rested this long," he said. "But I gave my best effort to set my mind straight, and I don't feel that I had a long break."

"Cannetti has power and he has a tough style of fighting," he said. "I will take advantage of my long reach and attack his weaknesses."

"We tried to make Kang an all-round fighter, not just a fighter who is strong in wrestling," he said. "We also worked hard to improve his mental strength." (Yonhap)