JINCHEON, South Korea -- The torch for the 2018 PyeongChang Winter Games toured the national training center for Olympic athletes on Wednesday, with summer sports stars lending support to the quadrennial competition.

The torch relay, which began on Nov. 1, reached the Jincheon National Training Center in Jincheon, some 90 kilometers south of Seoul in North Chungcheong Province. 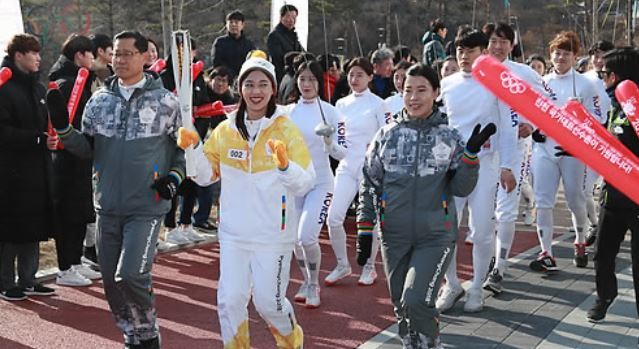 South Korean fencer Kim Ji-yeon carries the torch for the 2018 PyeongChang Winter Olympics at the Jincheon National Training Center in Jincheon, North Chungcheong Province, on Dec. 20, 2017. (Yonhap)
Lee Jae-geun, head of the training center, received the flame to begin a 1.4-kilometer relay at 12:30 p.m. He then passed the torch to Kim Ji-yeon, the 2012 Olympic champion in women's sabre fencing.

As Kim started her run, 20 of her national teammates formed a sword arch for her.

Kim moved inside to the velodrome, where former cycling star Cho Ho-sung, now the national team head coach, received the torch. Cho carried the flame around the track on his bike, escorted by 38 riders, and then hopped over to the weight room, where former wrestling Olympic gold medalist Kim Hyeon-woo was awaiting.

The last summer sport athlete to carry the torch was rising swimming star An Se-heyon.

The butterfly specialist advanced the flame 50 meters in the pool on the sidestroke, holding the torch with her right hand and swimming with her left arm.

The torch relay will cover 2,018 kilometers in total -- a nod to the year in which the Olympics is taking place -- and the Olympic flame will travel through nine provinces, eight major cities, and 151 counties and districts. It will wrap up at PyeongChang's opening ceremony on Feb. 9, 2018.

The torch was designed to keep the flame alive in the high altitudes of PyeongChang, some 180 kilometers east of Seoul in Gangwon Province, and in blustery winter conditions in the region. When wind blows toward the flame, an air tunnel is created to provide more oxygen, which will help keep the flame lit throughout the torch relay. A pentagon-shaped hole in the bottom of the torch will help drain water out in rainy conditions. And a three-layered umbrella-type cover will protect the flame against snow and wind.

The color white was inspired by white porcelain, and also drew cues from snow and ice, two major symbols of the Winter Olympics.

The torch is 700 millimeters tall, representing the altitude of PyeongChang, which sits 700 meters above sea level.

The five-angled shape in the middle of the torch's cap represents "the spirit of sports, which connects races, nations, religions, genders, cultures and the five continents around the world, uniting them with passion," according to PyeongChang organizers. (Yonhap)