Workers, foreign spouses and international adoptees gathered in front of Seoul Finance Center near City Hall, with similar events held in Busan and Daegu on the same day.

Several migrant workers carried signs showing the conditions of their accommodation and how much they were charged for it, following a change in the law this year that means employers can now charge up to 20 percent of total pay for accommodation they provide. 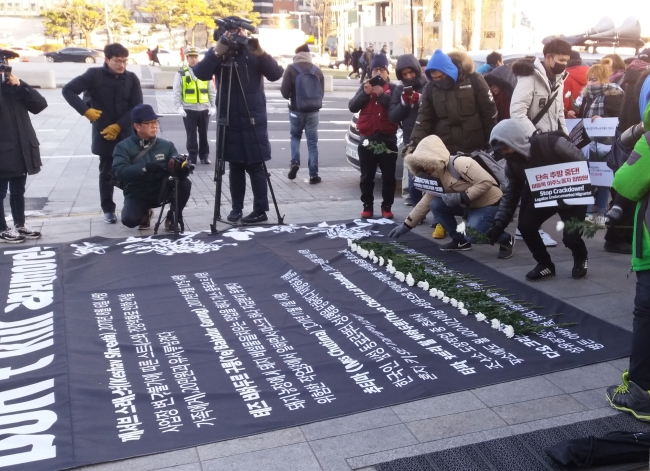 Attendees at the International Migrants Day event in central Seoul lay chrysanthemums on a banner listing the recent deaths of five foreign residents, in Seoul on Sunday. (Paul Kerry/The Korea Herald)
“These days, there are many examples of employers brazenly taking 250,000 won to 300,000 won for lodging,” said Srey Na, leader of the Khmer Workers’ Rights Association. “This is for housing in ‘vinyl houses’ (in polytunnels) and shipping containers that doesn’t even have a toilet. In winter, some places do not have heating or even hot water. People are being forced to live in uninhabitable places.”

One poster showed a total charge of 1.1 million won ($1,020) a month for two foreign workers on minimum wage to live in a plastic-covered one-room outhouse, including charges for gas and rice. 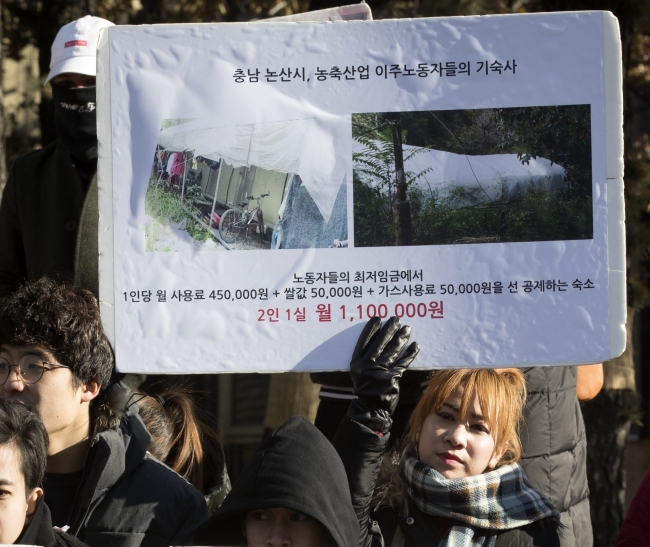 A woman holds up a poster describing living conditions of two migrant workers at the International Migrants Day event in central Seoul. (Yonhap)

Srey Na also complained about irregular pay that did not meet regulations and poor working conditions.

“Because we are told to work extra hours we are faced with serious dangers,” she said. “We are sick and in quite some pain, but our employers ignore this. The force us to work and do not give us time off. If we ask for time off for sickness, they do not give it to us, but instead threaten to have us sent back to our homelands.”

The Migrant Trade Union Senior Vice Chairman Shekh al-Mamun also spoke about the dangers migrants face, saying they were contributed to by the Employment Permit System through which E-9 working visas are issued. The EPS requires workers to gain permission from their workplaces if they want to change jobs, leaving them open to abuse by employers.

He spoke about hateful comments about a migrant woman who was murdered, suggesting her death was a good thing because she was in Korea illegally.

The group of about 150 people then marched to City Hall and then to the Government Complex-Seoul in Gwanghwamun, where they laid chrysanthemums on a banner highlighting five recent migrant deaths.

Shreshtha died by suicide. He had been suffering from stress and ill-health after being told he could not change workplaces.

Gurung died from inhaling toxic fumes while clearing out pig waste. His employers are accused of not providing him with a mask.

Chutina was killed after she reported being sexually abused by her husband. She leaves behind a 13-year-old son.

Bahadur fell to his death while working at a dockyard. He had been working 400 hours a month.

Guinto died after being caught in machinery at work. He had been working 12-hour days to pay medical bills for his father and brother.

“Migrant workers still haven’t been able to secure protection of their rights,” said MTU head Udaya Rai. “In the UN Convention on Migrant Rights it says that all workers can have their human and labor rights protected. Twenty-five years have passed, and the Korean government still has not ratified it.”