The Kims and the rest of the men's national team returned home from the Channel One Cup in the Russian capital that they played last week. The 21st-ranked South Korea fell to No. 1 Canada 4-2, before losing to the fourth-ranked Finland 4-1 and then to No. 3 Sweden 5-1.

This was South Korea's last tournament before the 2018 PyeongChang Olympics, where it will make its Winter Games debut against Canada, the Czech Republic (No. 6) and Switzerland (No. 7).

The Kims said they got a taste of what it's like to play high-ranked teams. 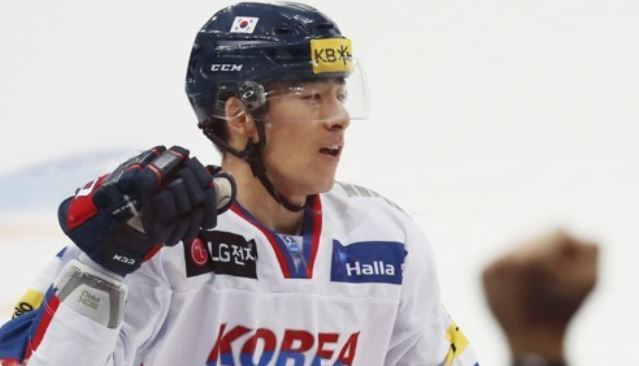 In this Associated Press photo taken on Dec. 15, 2017, South Korean forward Kim Ki-sung celebrates his goal against Finland
"We never played against Canada, Sweden and Finland before, so we didn't know what to expect," said Kim Sang-wook, 29. "But after these three games, I think we'll be able to prepare for upcoming games with more confidence. These opponents were all faster than our team but it was a good learning experience for us before the Olympics."

Ki-sung, 32, agreed that the fear factor wore off for his team as the tournament went on, and South Korea should be even better at the Olympics.

South Korea was outshot 156-42 in the three losses in Moscow, and the Kim brothers accounted for majority of the team's offensive production.

The two linemates, plus winger Mike Testwuide, were the only South Koreans to register a point.

Kim Ki-sung had a goal and three assists, while Sang-wook had two goals and a helper. Testwuide, a Colorado native who was naturalized in 2015, scored one and set up another.

South Korea held a lead in all three games, before ultimately succumbing in the face of opponents' onslaught.

"At the Olympics or the world championships, we'll always be the biggest underdog, and so we have to step up our game even more," Sang-wook said. "When we go up against top teams, we won't get to keep the puck for too long, and we have to concentrate when we do get our chance."

Ki-sung said it is "always nice to score goals and get assists," especially against good teams, but the team must learn to play better with a lead

"The key for us is to just keep pace with these teams," he said. "I think we were able to make some adjustments in that regard over those three games." (Yonhap)