INCHEON -- A Canadian by birth but South Korean by passport now, hockey goalie Matt Dalton said he experienced "weird" feelings at a recent tournament in Moscow.

South Korea faced Canada to open the Channel One Cup in the Russian capital last Wednesday. As is the custom in international hockey, anthems of both countries were played inside the VTB Ice Palace.

And this was the first time Dalton, who acquired South Korean citizenship in 2016, heard "O Canada" as a member of the South Korean national team.

"It's a really hard feeling to explain to people. Somewhat similar to when I first started playing for Korea, that kind of feeling," Dalton told Yonhap News Agency at Incheon International Airport, after arriving back from Moscow. "When 'O Canada' was going on, it was special but it was definitely a little awkward. I didn't sleep very well that day. It was a very weird day, a lot of emotions. I am glad I did it and I am glad it's over. I now know what to expect." 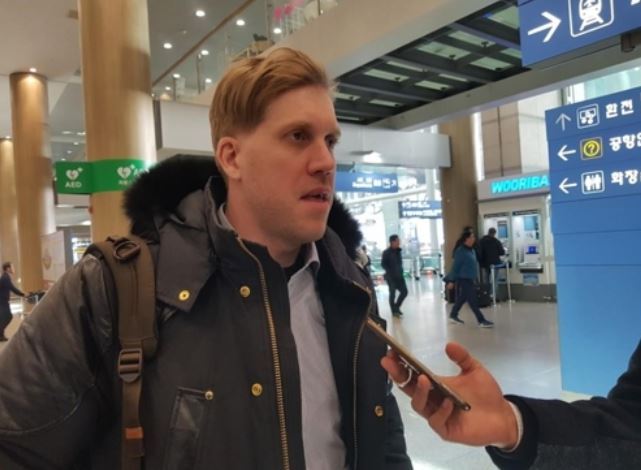 South Korea men`s national hockey goalie Matt Dalton speaks to Yonhap News Agency at Incheon International Airport on Dec. 19, 2017, after returning home from the Channel One Cup tournament in Moscow. (Yonhap)
He had been teammates with the Canadian starting goalie, Ben Scrivens, for the Reading Royals in the East Coast Hockey League during the 2010-2011 season. Dalton said he caught up with Scrivens after the game, and it was "cool" to be reunited with his old mate after years.

South Korea, No. 21 in the world, actually led the top-ranked Canada 2-1 after one period. Dalton said it was "an amazing experience" to be sitting in the locker room holding a lead over the two-time reigning Olympic champion, though South Korea ended up losing the game 4-2.

Dalton did all he could to keep his team in the game, making 53 saves against Canada. In fact, that was the running theme throughout the tournament, as Dalton made 53 stops in a 4-1 loss to Finland and 42 more in a 5-1 loss to Sweden.

"I think everyone was surprised. No one really knew what to expect," he said. "I think that we showed that we might be the 21st ranked team but we're getting better. That's the most important thing. Just to be able to be on the ice with those countries is something we're going to be pretty proud of."

Getting peppered with so many shots was as mentally draining as it was physically, Dalton added.

"Even for 10 seconds, you let your mind slip, that could be the goal right there," he said. "I felt like, as the tournament went on, especially in the Sweden game, I was pretty tired. There was maybe a couple of shots, maybe if I was fresh, I would have had them."

This was the last tournament before South Korea makes its Olympic debut at PyeongChang next February. Canada, the Czech Republic (No. 6) and Switzerland (No. 7) will be the group stage opponents, and the Channel One Cup drove home one point crystal clear: at the Olympics, South Korea will only go as far as Dalton takes it.

Dalton said it's going to take a total team effort to get better.