[ The Korea Herald – Send E-mail ]
Allies mulling deferring war games after Olympics: report
By Yeo Jun-suk
Published : Dec 11, 2017 - 15:53
Updated : Dec 11, 2017 - 18:21
With the 2018 PyeongChang Winter Olympics and Paralympics around the corner, South Korea and the US are considering postponing their annual military drills to avoid provoking North Korea ahead of the global sports event.

Citing diplomatic sources, the Japanese broadcaster NHK reported Monday that the South Korean and the US governments have been in talks to defer the Key Resolve combined exercise, which North Korea regularly protests likening it to a war rehearsal, until after the games.

The Olympics are to take place from Feb. 9-25, with its Paralympic Games scheduled from March 9-18. This year’s Key Resolve ran from March 13-24. The military has not announced the timeline for the 2018 exercise yet.

South Korea’s Joint Chiefs of Staff, when asked about the NHK report, just said the two sides were yet to finalize the exercise plan.

“As far as we know, no decision has been made (on next year’s exercise schedule,)” JCS spokesperson Col. Roh Jae-chun said in a regular press briefing. 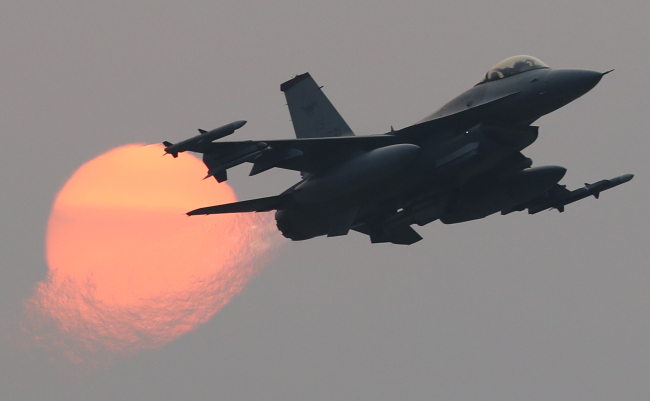 US Air Force F-16 fighter jet takes part in a joint aerial drill exercise `Vigilant Ace` Thursday afternoon (Yonhap)
Along with Ulchi Freedom Guardian, Key Resolve is one of the two main joint drills between allies, performed annually to reinforce their defense posture against the North. The militaries usually begin discussions months before an exercise kicks off.

Calls for postponing the annual exercise emerged from South Korea, with the engagement-seeking Moon Jae-in administration viewing the Olympics as an opportunity to defuse cross-border tensions and resume bilateral talks on denuclearization.

In conjunction with the UN resolution adopted last month calling for the “Olympic truce” during the PyeongChang Olympics, the presidential office Cheong Wa Dae said it even considered suspending the Key Resolve exercise.

“(Suspending the military exercise) has long been considered as an option” to successfully host the Olympic Games and defuse tension on the Korean Peninsula, a Cheong Wa Dae official said in an interview with Yonhap News Agency on Nov. 23.

But the mood appeared to have changed after North Korea test-fired Hwasong-15 intercontinental ballistic missile on Nov. 29, breaking its monthslong hiatus of military provocations since its sixth nuclear test in September.

During the National Security Council meeting following the missile launch, President Moon said peace on the Korean Peninsula was “impossible” unless North Korea ended its military adventurism. Until then, the allies and international community need to apply strong pressure and sanctions against the North, he added.

North Korea has long demanded South Korea and the US halt joint military drills, although the allies insist they are defensive in nature.

This year’s Key Resolve, considered to be the largest-ever in scale, involved about 300,000 troops and the US strategic assets, including F-35B stealth fighters and the USS Carl Vinson nuclear-powered aircraft carrier.