Iris recognition is biometric identification that uses irises of an individual’s eyes, whose complex patterns are unique, stable, and can be seen from some distance.

“Galaxy S9’s iris scanner will have an improved camera lens and functions to make it better to recognize the eyes of users,” a source familiar with the matter told The Korea Herald.

“The iris camera lens will be improved to 3 megapixels from 2 megapixels of Galaxy S8 and Galaxy Note 8 to capture clearer images. The scanner will better recognize users’ irises even when they wear eyeglasses, move their eyeballs or are in a too dark or too light environment,” the source added. The response time will also be shorter from the current one second.

Alongside the improvement in hardware, Samsung is developing software to more accurately and safely recognize users’ irises.

Samsung is also on target to expand the iris scanner into budget models possibly late next year or early 2019 with the ultimate aim of replacing physical banks with mobile banking, according to the source. Currently, Galaxy S8 and Galaxy Note 8 are the only Samsung smartphones that have iris scanners.

A Samsung spokesperson said, “Iris scanner is the safest biometric authentication (among iris, fingerprint and face recognition) and we will continue to improve the system for upcoming smartphones for safer banking transactions,” without disclosing any detailed specifications of Galaxy S9.

Samsung is now accelerating the use of its biometric authentication into banking and financial services. 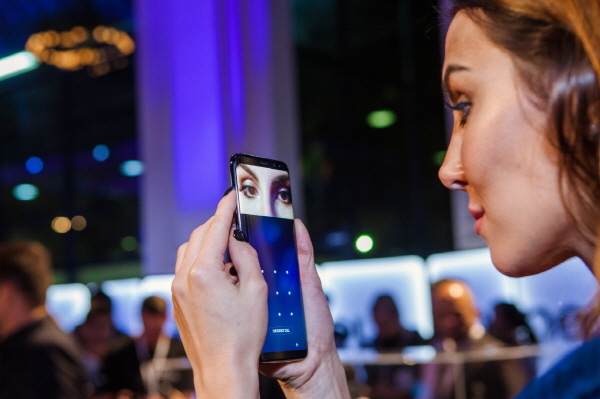 A user tries to unlock her Galaxy S8 through iris scanner. (Samsung Electronics)
Its mobile payment and digital wallet service, Samsung Pay, is able to be logged in through iris and fingerprint verification. Samsung Pay is a mobile service allowing users to use their phones like cash or credit cards and withdraw or send money from bank accounts.

“Our customers using Galaxy series are able to use all mobile banking services, including money transfer, subscription to new financial products, loans and currency exchange, through fingerprint and iris scanners without typing in their ID and password,” said a Woori Bank official.

“If security is more guaranteed by smartphone makers like Samsung, we are willing to more actively use the biometric authentication in the future,” he added.

Kim Jong-ki, a researcher specializing in the mobile industry at the Korea Institute for Industrial Economics & Trade, said, the iris scanner is expected to be more widely used for banking transactions globally in the future as it is safer than fingerprint and face recognition although security should be more improved than now.

Concerns still remain among consumers as a series of reports on hacking the biometric system follow every time a new smartphone biometric system is unveiled. In May, Samsung Galaxy S8’s iris scanner was fooled by German hackers with dummy eyes although Samsung immediately retorted that the hack was unrealistic in reality.