INCHEON -- Rescue workers on Tuesday discovered the bodies of two missing men from the chartered fishing boat that capsized two days earlier in waters off the western coast, killing 13 people aboard, the Coast Guard said.

They found the captain of the Seonchang-1, only identified by his last name Oh, lying on a mudflat about 3 kilometers southwest of the accident site off Incheon at around 9:40 a.m., with his black clothes intact.

Just past noon, a rescue helicopter discovered the last remaining missing person, a 57-year-old angler surnamed Lee, on the sea about 2.2 km southwest of where the accident happened.

Both of them were identified by their families and transferred to hospital morgues.

The authorities had been searching the waters and nearby coasts for them since Sunday, when the 10-ton recreational fishing vessel overturned after hitting a 336-ton tanker in the Yellow Sea. Seven people survived the accident. 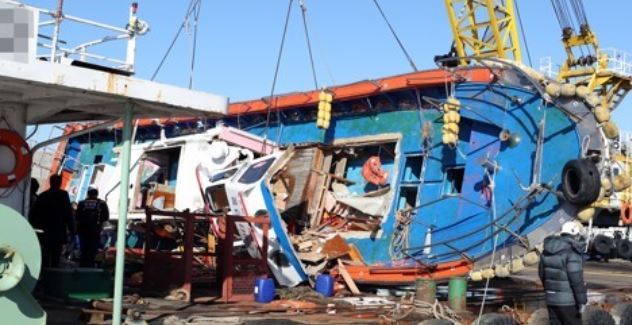 This photo dated Dec. 4, 2017, shows the wreckage of the Seonchang-1, the fishing vessel that capsized after hitting a tanker in waters off Yeongheung Island, west of Seoul, on Dec. 3 2017. (Yonhap)
It was the worst tragedy involving a South Korean recreational fishing boat since a similar accident in waters near Jeju Island in September 2015. Fifteen people were killed and three went missing at that time.

The authorities have mobilized dozens of Coast Guard boats, Navy and government vessels, as well as Coast Guard and Air Force planes to search the area.

Investigators said Monday they requested arrest warrants for the tanker's captain and a crew member on charges of professional negligence resulting in death. They have been put under emergency detention for questioning.

The fishing boat was towed to the Coast Guard pier in Incheon earlier in the day. (Yonhap)