INCHEON -- Rescue workers were to resume their search Monday for two people missing in the deadly capsizing of a fishing boat off the west coast of Incheon a day earlier that claimed the lives of 13 people.

Seven people have been rescued, but the accident left 13 people dead and two missing.

It was the worst tragedy involving a South Korean recreational fishing boat since a similar accident in waters near Jeju Island in September 2015. Fifteen people were killed and three went missing at that time. 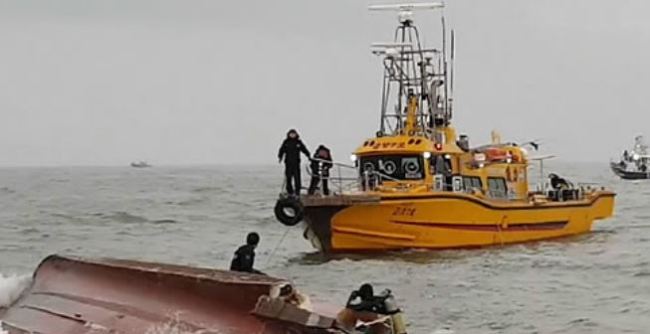 Officials said they will put more search vessels into the operation.

A total of 59 vessels, 15 airplanes and 59 divers are expected to be mobilized for the operation in addition to some 1,380 people assigned to search the shore as their bodies could have washed ashore.

Coast Guard officials are also trying to determine the cause of the accident.

Investigators have put the tanker's captain, identified only by his surname Jun, 37, and another crew member into emergency detention for questioning on charges of professional negligence resulting in death. Officials suspect the tanker's crew didn't do enough to avoid a collision even though they knew of the existence of the fishing boat nearby.

"Captain Jun has stated to the effect of acknowledging his fault, saying he was aware of the fact that the fishing boat was operating nearby," a Coast Guard official said.

The ill-fated fishing boat was towed to the Coast Guard pier in Incheon earlier in the day. (Yonhap)