South Korean residents spent 8.58 trillion won ($7.88 billion) overseas in the July-September period, up 5.4 percent from a year earlier, according to the data compiled by the Bank of Korea (BOK),

The third-quarter tally marks the highest since the BOK began to compile related data in 1970.

The accumulated overseas spending also hit a record high of 23.7 trillion won in the January-September period, up 8.2 percent from the same period the previous year, the data showed. 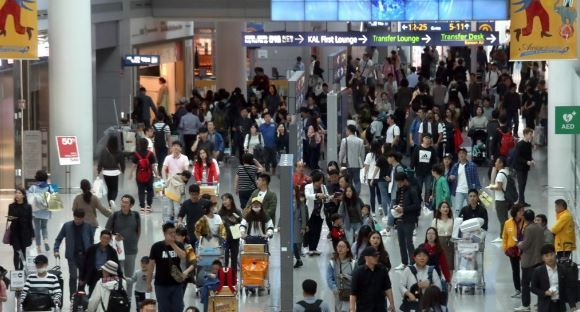 The sharp rise in overseas spending is attributable to a whopping increase in overseas trips. The total number of outbound travelers reached near some 20 million in the first nine months of this year.

In the fourth quarter, Koreans' overseas spending is expected to shoot up as more than 1 million South Koreans flew overseas during the long Chuseok fall harvest holiday that fell in early October.