The latest round, held at Coex in southern Seoul, was held with only a brief moment of interruptions by protestors, unlike the first round last month that was suspended when a group of local farmers disrupted the forum in strong protest against the trade deal. 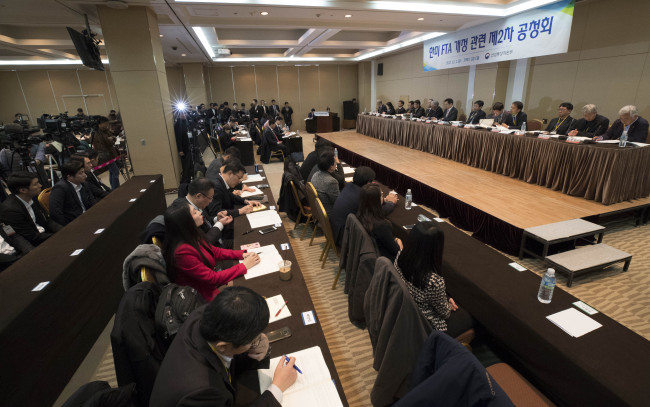 The Ministry of Trade, Industry and Energy holds a second public hearing on the Korea-US Free Trade Agreement at the Coex in Seoul on Friday. (Yonhap)
During the two-and-a-half-hour hearing held by the Ministry of Trade, Industry and Energy, select local farmers protested arguing the government needs to terminate the trade deal as it continues to threaten their livelihood, but the event was able to conclude as planned.

Local trade officials and experts gave presentations on potential economic benefits and pitfalls with regard to FTA revisions, while members of the public were also permitted to voice their opinions.

Despite trade officials previously stating the government would not bow down to US pressure with regards to agriculture, and even going as far as saying it is ready to terminate the deal if need be, members of the farming sector lambasted the Trump administration against pressuring Korea on further opening up its agriculture sector and continued urging the government to not to back down during negotiation talks.

Farmers voiced concerns over growing imports of cheaper US products, as well as data that showed imports of US beef accounts for more than half of South Korea’s imported beef market for the first time in 14 years, on the back of the two countries’ free trade agreement.

As for the manufacturing sector, Lee Jin-myeon, a researcher at the Korea Institute of Industrial Economics & Trade, warned that negotiations regarding manufacturing must be strategic as to not add increased barriers by reverting to closed markets and trade protection.

“As opposed to regressing to trade protectionism, we should look to create additional tariff cuts and cooperate (with the US) on non-tariff sectors,“ Lee said during his presentation.

”The FTA backlash is likely to have a negative impact on trade relations as well as with investment deals already established by the two nations,“ he added. ”It is necessary that we set the tone for the upcoming revision negotiations as one of compliance willingness for additional market opening.“

The government was also urged by the public to take precaution when it comes to negotiating the country’s automobiles sector. During the hearing, members of the pubic took stock of the US’ tactics in renegotiating the North American Free Trade Agreement trade renegotiation, and voiced additional concerns that US President Donald Trump would be seeking to expand the percentage of American parts used in local vehicles.

Industry experts have predicted the US will likely demand an increased use of American-made parts on Korean vehicles exported to the states.

As the Trump Administration is already pushing for a higher percentage of American auto parts to be used by its major trading partners through its ongoing NAFTA revision talks, experts are predicting similar provisions will be requested by the States when amending KORUS.

NAFTA provisions currently stipulate that in order to export automobiles made in Mexico or Canada to the United States tariff-free, 62.5 percent of its auto parts must be produced within the three countries. However, the Trump administration is now arguing that this proportion should be increased to 85 percent and that 50 percent of the auto parts should be procured in the US.

The Trade Ministry held the public forums in accordance with the FTA amendment negotiation procedures to collect public opinion on the trade deal in order to proceed with FTA negotiations.

Following the hearing, the ministry said it would reflect all opinions voiced and will notify parliament of its intention to renegotiate the trade deal, which would wrap up the domestic procedures needed to start launching official trade revision talks.