President Moon Jae-in on Friday promised additional support for engineers and skilled workers, saying the country's success in the fourth industrial revolution depends on them.

"At every juncture of the country's industrialization and major development in the manufacturing industry, there were skilled workers. Experienced skilled workers led the Republic of Korea to become a power house of technology and manufacturing," the president said.

The remarks came in a meeting with the South Korean delegation to the 2017 World Skills Competitions at his office Cheong Wa Dae. The South Korean team ranked second in the overall standings at the annual event held in Abu Dhabi this year. 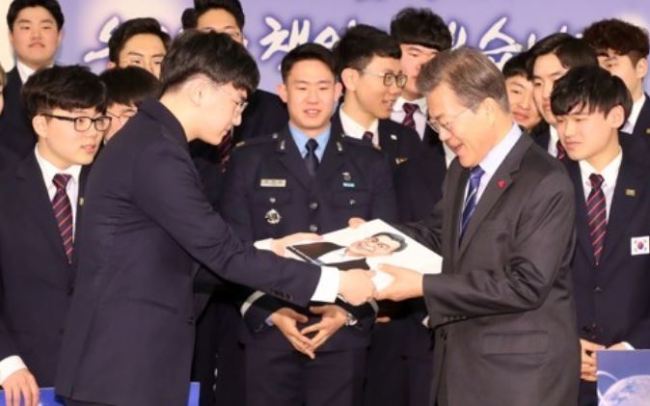 President Moon Jae-in (R) receives a caricature of himself as a gift from the South Korean team that competed at the World Skills Competition, held in Abu Dhabi in October, before the start of a special lunch with the team at his office Cheong Wa Dae in Seoul on Dec. 1, 2017. (Yonhap)
"We have already succeeded in our second and third industrial revolutions. As those before you opened the path to becoming a manufacturing and digital powerhouse, our blueprint for the fourth industrial revolution is being created by your own hands," the president said, according to Cheong Wa Dae pool reports.

The president said his new government will acknowledge their efforts and achievements.

"It will pursue policies that focus on improving the working and living conditions you face," he said. "We will make sure your efforts and achievements receive their due rewards. We will create a society where skilled workers and craftsmen are respected." (Yonhap)