In a report to the National Assembly, the ministry said the North is believed to have conducted a successful missile test on Wednesday.

The Hwasong-15 missile, launched from a site just north of Pyongyang, reportedly traveled 950 kilometers at a maximum altitude of 4,475 km to splash into the East Sea.

"It's assessed that the flight test was successful," the ministry said. "In the case it were fired at a normal angle, it would be capable of flying over 13,000 km. That means it can reach Washington, D.C." 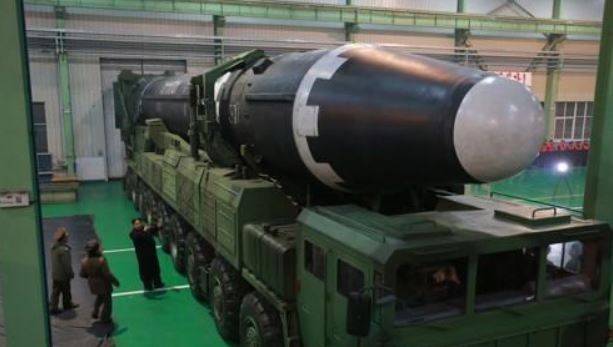 North Korea`s new Hwasong-15 ICBM lies mounted on a mobile launcher in this photo released by its state media. (For Use Only in the Republic of Korea. No Redistribution) (Yonhap)
The ministry added, however, that additional verification is needed on atmospheric reentry, final-phase precision guidance technologies and warhead conditions before concluding whether it is a reliable long-range missile.

It described the Hwasong-15 as a new ICBM with an appearance and features quite different from the previous model, the Hwasong-14.

It is two meters longer and 0.4-0.8 meter wider in diameter, the ministry said, apparently basing these measurements on analysis of photos released by the North a day earlier.

The new missile's transporter erector launcher has nine wheels on each side, which compares to the Hwasong-14's 16-wheel TEL.

The first stage of the Hwasong-15 used a cluster of two Hwasong-14 engines, and analysis of the second-stage engine is under way, added the ministry.

"The body size of the second stage has increased three or four times in comparison with the Hwasong-14," it said.

Meanwhile, South Korea had a working-level video conference with the United States and Japan to discuss the North's latest provocation.

In the defense consultations, a routine session held after the North's missile or nuclear experiments, the three parties condemned it in "the strongest language" and urged Pyongyang to abide by international obligations, according to the ministry.

They also agreed to keep cooperating in efforts to apply "maximum pressure" on the North so as to change its course, it said.