Outbound shipments came to $49.67 billion for November, up from $45.3 billion a year earlier, according to data compiled by the Ministry of Trade, Industry and Energy and the Korea Customs Service.

The total value of exports in the first 11 months of this year hit a record high of $528.4 billion.

Exports for Asia's fourth-largest economy have been on a steady rise since November 2016, led by an upturn in oil prices and recovering global trade. 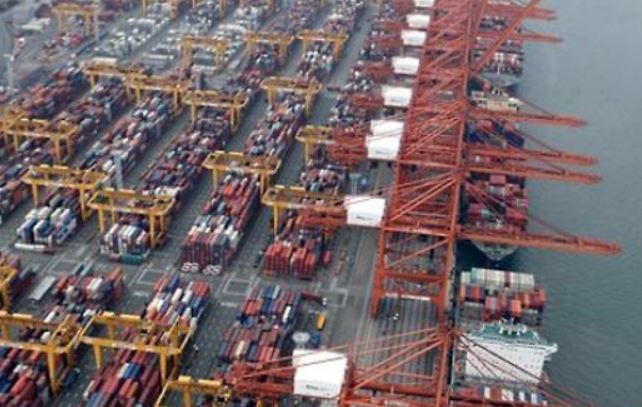 (Yonhap)
Exports to the US market swung back to growth in November on increased sales of wireless communications and computers, as well as petrochemical and machinery products.

The ministry attributed the hike in exports to greater demand for semiconductors, machinery and petrochemical products, as well as steel, autos and displays.

The semiconductor industry has hit a super cycle, with demand for DRAMs for mobile chips and servers outpacing supply, boosting overseas sales by tech giants, including Samsung Electronics Co.

Displays also posted a robust performance on strong sales of organic light-emitting diode panels, which are used in premium televisions and the latest mobile phones.

General machinery benefited from the infrastructure boom in developing nations in line with the global economic recovery.

Outbound shipments of petrochemical products rose for 14 months in a row, helped by the pickup in global oil prices and increased supply from new production lines.

Sales in the US market recovered on the back of brisk exports of wireless communications equipment and computers, as well as petrochemical and machinery products.

The government was upbeat about the export prospects next month but expressed concerns over the strengthening of the local currency, which could erode the profitability of companies.

"As exports continue to remain brisk, the total trade balance is expected to top 1 trillion won in mid-December," Paik Un-gyu, minister of trade, industry and energy, said in a release. "As the stronger won is expected to put the burden on exporters, the government will come up with additional measures to support small and medium-sized companies if the Korean won continues to rise against the US dollar." (Yonhap)