[ The Korea Herald – Send E-mail ]
Korean ‘babbling comedy’ team Ongals to perform at London’s West End
By Rumy Doo
Published : Nov 30, 2017 - 15:27
Updated : Nov 30, 2017 - 15:27
Mime, beatboxing, juggling and babbling like babies while dressed in pajamas –- this is the brand of non-verbal, family-friendly comedy that Korean team Ongals hopes to spread around the world.

In its next gig, the now seven-member team will become the first Korean group to perform in London’s West End, the home of world-class theater. Ongals will be performing in a five-week run starting Jan. 4, 2018 at the Soho Theatre, a comedy venue founded some 40 years ago.

“Since ten years ago, we’ve been setting a goal we want to achieve each year and we’ve been able to do it. This time, we wanted to try venturing to the West End,” said member Chae Kyeong-sun at a press call in Gwanak-gu, Seoul, Wednesday.

Since 2007, Ongals has been steadily gaining recognition abroad in international comedy circles. After performing in Asian cities such as Osaka, Guangzhou and Beijing, the team received five stars at the Edinburgh Fringe Festival, the world’s largest arts festival, in 2010.

It became the first Asian team to win the Director’s Choice award at the Melbourne Comedy Festival in 2014, where Ongals performed a sold-out show.

The group has since showcased its material at comedy festivals all over the world, including Dubai, Brazil, Canada, Spain and Switzerland. 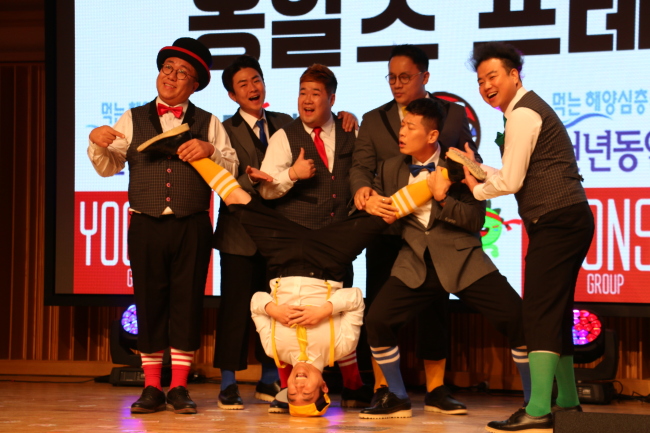 Non-verbal comedy team Ongals performs at a press conference in Gwanak-gu, Seoul, Wednesday. (Yoonso Group)
Reviews have lauded Ongals for breaking down language barriers in comedy and providing family fun for all ages.

“I met a clown during one of our performances abroad,” said member Cho Jun-woo, a clown who has received offers to perform at the Cirque du Soleil, the world’s largest theatrical producer, since his touring with Ongals.

“He didn’t say a word ... during his routine. Afterwards, he said he didn’t want to hurt anybody through words, which is why he decided not to speak.

“That’s the kind of comedy that we want to do, something that everybody can enjoy together, comedy that is warm and kind.”

Despite its growing footing in the international comedy scene, fewer Koreans are familiar with Ongals. In the future, the team hopes to reach out to Korean audiences as well as help Korean comedy acts perform on the global stage.

“When we first dreamt of performing overseas 10 years ago, there was nobody who could offer us advice. We hope future Korean comedians will be able to dream bigger after seeing us,” said Chae.

“We hope more comedians will join us and spread out to the international stage, so that the world can see that there is a thriving comedy and performance scene in Korea,” said member Jo Su-won.