The Ministry of Health and Welfare said it had recently proposed a revision to the existing public health promotion law in order to make the users of the smokeless tobacco e-cigarette pay higher taxes. It added smokers will be warned of dangers to their health through pictures and messages on the packs. 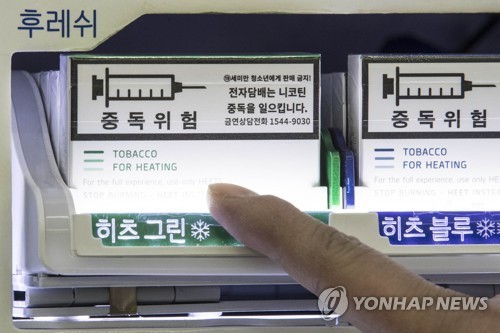 On Friday, the revision bill obtained approval from the Health and Welfare Committee at the National Assembly. Still, it has to gain endorsement from a parliamentary legislation committee and pass through a floor vote at the plenary session slated for next month, according to the ministry.

Under the revision bill, the "heath promotion tax" for Philip Morris' "iQOS" and other smokeless tobacco e-cigarette products will rise to 750 won per 20 cigarettes from the existing 438 won, the ministry said.

In addition, a total of 10 different warning pictures will appear on the product's packet if the bill is finally passed by lawmakers, it said.

The iQOS is a pen-shaped and battery-powered tobacco stick that is heated just enough to produce an aerosol but not combust.

Smokers increasingly prefer the presence of real tobacco in the iQOS product compared to existing e-cigarettes which do not use real tobacco. (Yonhap)