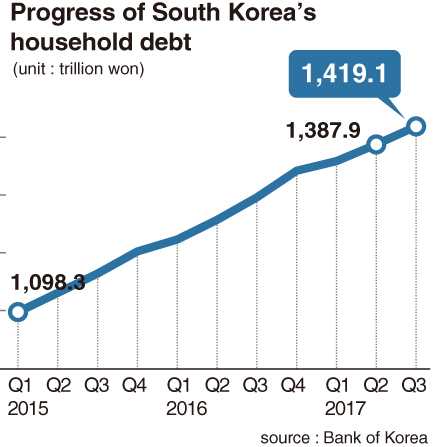 The outstanding total of household debt stood at 1,419.1 trillion won ($1.3 trillion) in the July-September period, up 9.5 percent from a year earlier, preliminary data by the Bank of Korea showed Wednesday. The amount was also a 2.2 percent rise from the previous quarter.

The latest data came a week before the BOK is to decide whether to freeze or adjust the all-time low key interest rate of 1.25 percent.

In October, the central bank froze the rate for the 16th consecutive month but Gov. Lee Ju-yeol added that “conditions are gradually maturing” for tightening monetary policies, hinting at an upcoming rate hike.