The 2018 PyeongChang Winter Olympics are hoped to expedite South Korea's economic cooperation with other countries, especially with Eurasian nations with which the country is seeking a free trade agreement, trade-related officials said Thursday.

The PyeongChang Games, opening in February, will bring a substantial number of foreign political and economic leaders to South Korea, naturally providing venues to address bilateral and multilateral issues. Officials hope that one of the opportunities will be in-depth talks on South Korea pursuing an FTA with the Eurasian Economic Union. 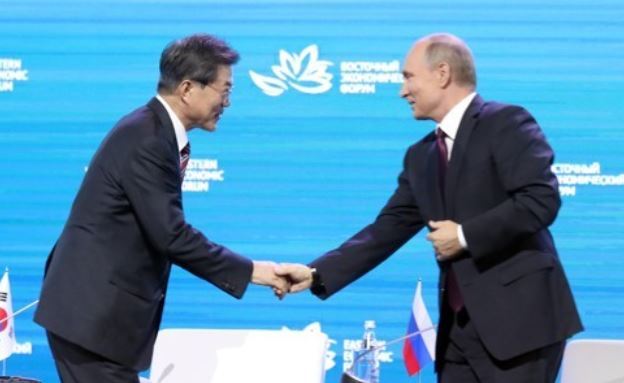 South Korean President Moon Jae-in (L) shakes hands with Russian President Vladimir Putin at the Eastern Economic Forum in Vladivostok, Russia, on Sept. 7, 2017. (Yonhap)
President Moon Jae-in during his visit to Vladivostok, Russia, in September stated South Korea wants to promptly seek an FTA with the Eurasian region. That same month Industry Minister Paik Un-gyu said South Korea will form a study group to lay the groundwork for the FTA, adding he hopes for the negotiations to be launched when Russian President Vladimir Putin comes to South Korea to attend the Winter Olympics. Paik acknowledged, however, that he wasn't certain that such a schedule can be met.

South Korea intends to start prior talks with Russia, the leading member of the EAEU, before engaging in negotiations with other members, according to officials. The two countries last year had completed a joint study on an FTA between South Korea and the EAEU.

South Korea's exports to Russia have mostly been passenger cars, auto parts and synthetic resin, while its imports largely have been crude oil, natural gas and natural resources.

"We will be looking for an FTA that encompasses not just commodities and services, but an overall economic spectrum, such as investment, industries and technological cooperation," an official at the Ministry of Trade, Industry and Energy said. "We need a strategy of connecting South Korea's manufacturing capacity, such as capital and technology, with Russia's demand for industrialization. South Korea will emphasize that there is a win-win situation if South Korea's development projects in energy, fisheries and the likes are matched with Russia's industrial policies." (Yonhap)