“(The government) is now taking a strong stand on agriculture sector, and will not retreat any further,” Paik Un-gyu, minister of trade, industry and energy told reporters Tuesday in the administrative city of Sejong. 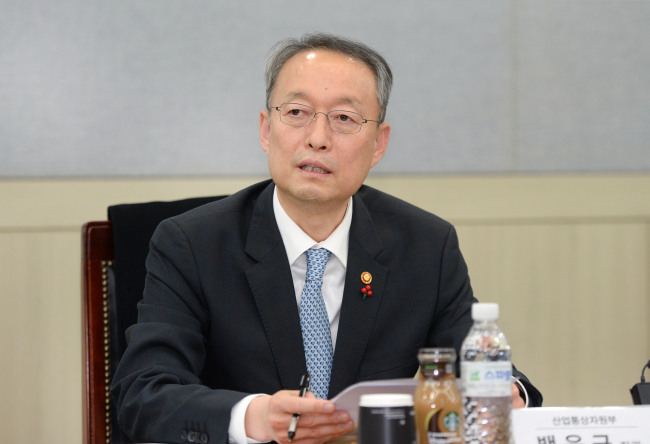 The US is aiming to narrow the trade deficit with Korea by exporting more goods from its auto sector and steelmaking industry, said the minister, while the US may also opt to further increase export of agricultural goods to Korea.

More than five years after the bilateral free trade deal came into effect, the US‘ calls for renegotiation with South Korea is inviting fears that it might further undermine farming sector in Korea, already struggling with product oversupply.

Earlier on Nov. 10, a public hearing on Korea-US FTA ground to a halt as farmers, demanding termination of the bilateral trade deal, disrupted the session. The government‘s economic feasibility study result suggested at the venue, indicating FTA renegotiation’s little impact on the Korean economy, misrepresented the local agricultural sector, argued the farmers.

Moreover, imports of US beefs from January to October took up over half of the Korean beef import market, which the Korea International Trade Association said marked the first in 14 years.

Paik suggested more purchases of US shale gas could be an alternative to US farm product imports to reduce the US’ trade deficit with Korea.

The US has continued to increase farm product exports in renegotiation deals with other nations. In its updated North American Free Trade Agreement goal released last week, the US called for Canada to eliminate tariffs on imports of US dairy, poultry and egg products.

During the press conference Tuesday, Paik also said he will visit the United Kingdom, France and Czech Republic to express Korea‘s intent on joining bids to build nuclear power plants.

Formerly a professor at Hanyang University with the expertise on new and renewable energy, Paik in July was appointed by the Moon Jae-in administration to head the Ministry of Trade, Industry and Energy.