The number of employed South Koreans aged 15-29 stood at 3.93 million last month, down 52,000 from a year earlier and marked the fifth consecutive month of decline, according to the data from Statistics Korea.

The figure accounted for 14.6 percent of the country's total employed people at 26.86 million, which was an all-time low percentage.

The portion, which hovered above 30 percent in the 1980s, has been in steady decline due to the country's low birthrate and rapid population aging, with the number staying in the 15 percent range since 2011.

Senior citizens made up for the falling youth employment, with the percentage of people aged 60 and older touching an all-time high in October. 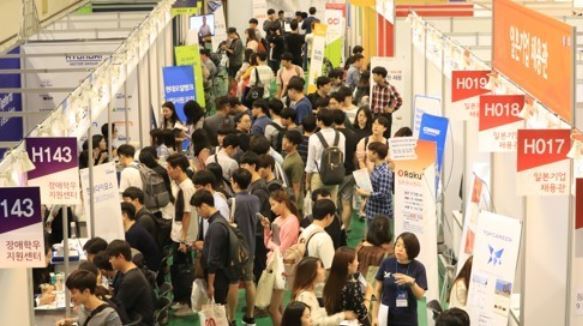 Young South Koreans attending a job fair. ( Yonhap)
A total of 4.39 million people in the age bracket were employed last month, up a whopping 252,000 from a year earlier. The figure made up a record high 16.4 percent of the country's total employed.

The statistical agency attributed the contrasting figures to demographic changes stemming from the nation's low birthrate and population aging. Also responsible was local firms' unwillingness to hire youth amid economic uncertainties, it added.

"Low youth employment stems from stalled growth in the number of people entering the labor market due to the low birthrate and other factors," an agency official said. "More jobs should be offered to young people to improve the situation."

Asia's fourth-largest economy suffers from a chronically low birthrate, which ranks as one of the lowest among the member nations of the Organization for Economic Cooperation and Development.

The country is also dogged by fast population aging, which forces many senior citizens to work after retirement amid an insufficient pension system. The ratio of people aged 65 and older is tipped to hit 14 percent of its 50 million population in 2017, with the figure hovering above 20 percent in 2026. (Yonhap)