Its labor-friendly policies have done little to ease the polarization of Korea’s labor market, only exacerbating youth unemployment and reducing jobs for low-wage workers.

According to data released by Statistics Korea last week, the unemployment rate for young people aged between 15 and 29 stood at 8.6 percent in October, up 0.1 percentage point from a year earlier. The figure was the highest for the month in nearly two decades, dating back to 1999 when the Korean economy was reeling from the aftermath of a devastating foreign exchange crisis. 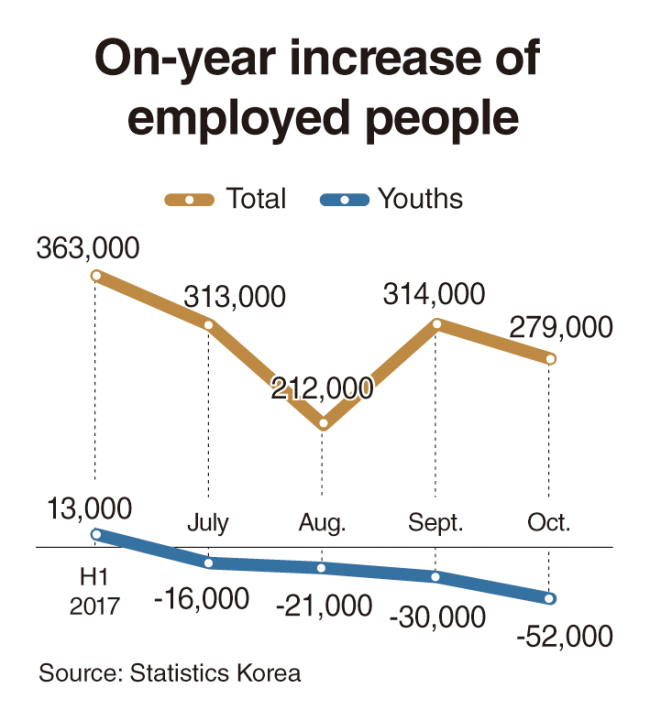 The number of newly employed youths decreased on-year for a fifth consecutive month in October.

The country’s employment rate edged up 0.2 percentage points from a year earlier to 61.3 percent in October, but the on-year increase in the number of employed people slowed to 279,000 from the previous month’s 314,000.

Since it was launched in May, the Moon administration has been pushing to raise the minimum wage, reduce working hours and turn more temporary jobs into permanent ones. In September, it also repealed a measure taken by the previous government last year to make layoffs and changes to working conditions easier.

This labor-friendly approach keeps large profitable corporations from offering more jobs preferred by young job seekers, while leaving most small businesses with no other choice but to cut their payrolls.

“The incumbent government’s job policy may be well intentioned, but the possibility is high that it will aggravate the polarization (of the labor market),” said Sung Tae-yoon, an economics professor at Yonsei University.

The widening gap in wages and other working conditions between big and small companies and between regular and irregular workers makes young people preoccupied with landing stable jobs at large corporations and public institutions.

A survey by the Employment and Labor Ministry last year found regular employees at small businesses were paid about half the average wage for permanent workers at large companies. Different job statuses amplify the wage gap.

According to recent data from CEO Score, a local corporate research firm, the operating profits earned by 261 affiliates of Korea’s top 30 conglomerates jumped 65.4 percent from a year earlier to 82.72 trillion won ($75.15 billion) in the third quarter of the year.

But the number of their permanent employees was up a mere 0.7 percent to 879,979 over the cited period.

The country’s booming exports have made little contribution to job creation, as major high-tech manufacturing exporters rely mainly on investment in facilities and equipment to increase production.

According to a study by the Bank of Korea, semiconductor and petrochemicals sectors, which have taken the lead in boosting Korea’s outbound shipments this year, hire an average 3.6 and 1.9 new employees when turnover increases by 1 billion won. The numbers are far lower than the manufacturing industry’s average of 8.8. The service industry’s average is 16.7. 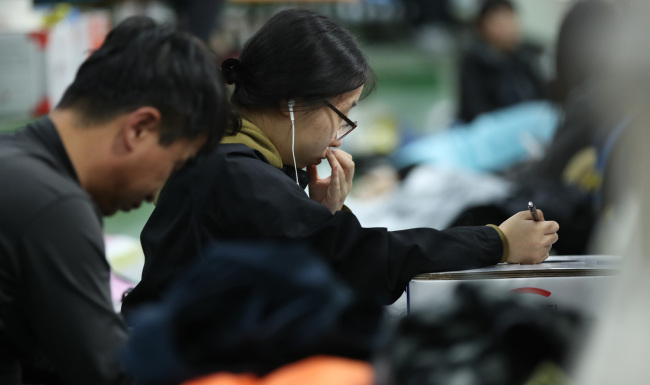 (Yonhap)
The Moon administration has recently vowed to step up efforts to advance the service sector and expand support for tech startups.

But it has made little headway in eliminating regulatory restrictions and persuading ruling party lawmakers to pass a law designed to enhance service industries.

According to a research by the Korea Development Institute, a state-run think tank, the passage of the law is expected to add up to 690,000 new jobs by 2030.

Experts say the Moon government’s push to create a massive number of jobs in the public sector will be fiscally unviable and fail to bring fundamental improvements in labor market conditions.

“What young people want is a decent job, which enables them to pursue a career with a long-term vision,” said Park Yoon-soo, a KDI researcher, noting this sort of work cannot be created simply by increasing fiscal spending.

The planned minimum wage increase is expected to drive more low-wage workers out of work.

Lee Jung-min, an economics professor at Seoul National University, forecast in a debate early this month a 10 percent rise in the minimum wage would result in a reduction of 1.4 percent in jobs with 44 work hours a week.

The decrease would be steeper in other regular jobs with shorter work week and temporary and part-time ones.

The Moon administration is pushing to raise the wage floor up to 10,000 won over the next three years, with the minimum wage set to rise by 16.4 percent from this year to 7,530 won per hour next year.

“It is now needed to review the job policy from the scratch,” said an official at a local business association, asking not to be named.