Park finished tied for sixth at the season-ending CME Group Tour Championship at Tiburon Golf Club in Naples, Florida, on Sunday (local time), at 12-under 276, three back of the champion, Ariya Jutanugarn. But that was more than enough to make Park just the third rookie to lead the tour in money.

Park, who'd already clinched the Rookie of the Year award last month, won the money title at $2,335,883. Fellow South Korean Ryu So-yeon was the closest pursuer at about $1.9 million, and Ryu finished well out of contention at five-under, leaving her tied for 30th.

Park said the money title was "a bonus" to her.

"I really don't know what to say. My only goal this season was to win the Rookie of the Year," she said. "Now that I've won the money title as well, I feel like I've had a really good season." 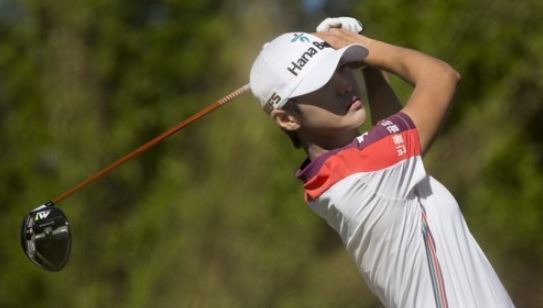 In this Associated Press photo, Park Sung-hyun of South Korea tees off during the third round of the CME Group Tour Championship at Tiburon Golf Club in Naples, Florida, on Nov. 18, 2017. (Yonhap)
Park and Ryu ended up as co-winners of the Player of the Year points race, tied atop at 162 points. They're the first pair to share the top player award since its introduction in 1966, and Park is the first rookie since Nancy Lopez in 1978 to sweep up the Rookie of the Year, the Player of the Year and money title.

Prior to this tournament, Ryu held the lead at 162 points, three better than Feng Shanshan of China and five ahead of Park. Lexi Thompson was in fourth at 147, and those three were the only ones with a chance to catch Ryu at the Tour Championship.

Players are awarded points for top-10 finishes: 30 for first, 12 for second, nine for third and seven for fourth, six for fifth and five for sixth, and so forth.

And by tying for sixth place, Park earned five points to pull into a tie with Ryu, who failed to add to her total by placing in 30th place.

Feng tied for 21st. Thompson had a chance to win the tournament and the Player of the Year honors at the same time, but missed a par putt from tap-in range at the 72nd hole to finish one shot behind Jutanugarn.

Park also had a chance at winning the Vare Trophy as the scoring champion but ended up in a close second behind Thompson. The American had the lowest scoring average at 69.114, with Park finishing at 69.247.

Park needed to be nine to 10 strokes better than Thompson -- 10 strokes if Thompson reached 10-under par or more.

Park began the final round at the Tour Championship tied for second with six others at nine-under, one stroke behind four co-leaders on the jam-packed leaderboard. Seven other players were sitting at eight-under through 54 holes.

Park had three birdies over her first six holes to briefly move to the top, but she parred her final 12 holes to close out at 12-under 276.

Park was actually six shots better than Thompson through 36 holes, but that advantage evaporated in the third round, when Park shot a 75 and Thompson carded a 69.

Lopez from the historic 1978 season remains the only player to win the money title, scoring title, Player of the Year and Rookie of the Year in the same season.

Even without the awards sweep, Park still enjoyed an outstanding rookie season. 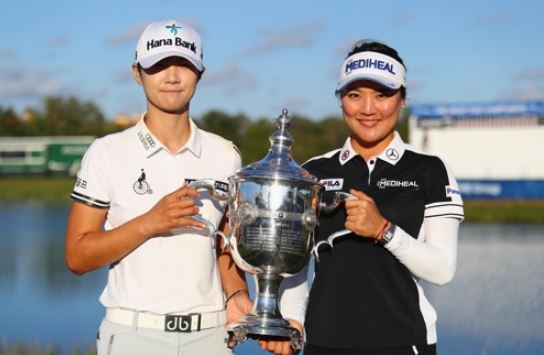 In this photo provided by the LPGA Tour, South Korean players Park Sung-hyun (L) and Ryu So-yeon hold the trophy for the Player of the Year after the conclusion of the CME Group Tour Championship in Naples, Florida, on Nov. 19, 2017. (Yonhap)
Thanks to victories at the US Women's Open and the Canadian Pacific Women's Open, Park was the runaway winner of the top rookie prize. And prior to the Tour Championship, Park was the only player to have earned more than $2 million this season.

Park even climbed to No. 1 in the world rankings briefly earlier this month, becoming the first rookie to reach that plateau. Her reign lasted only one week as Feng Shanshan of China overtook her on the strength of two consecutive wins.

Park was a Korea LPGA (KLPGA) Tour star before taking her talent to the United States. In 2016, Park won a tour-best seven times and set a single-season record with more than 1.3 billion won ($1.2 million) in earnings.

Park also made seven LPGA starts as a non-member, and posted four top-10 finishes, three of them at major championships. Park earned about $682,000, which would have been good enough to place her 22nd on the 2016 money list.

Non-members can join the LPGA Tour full-time the following year by winning a tournament or by making enough money to rank inside the top 40 at the season's end. Park is the first South Korean to join the LPGA Tour by taking the latter route. (Yonhap)