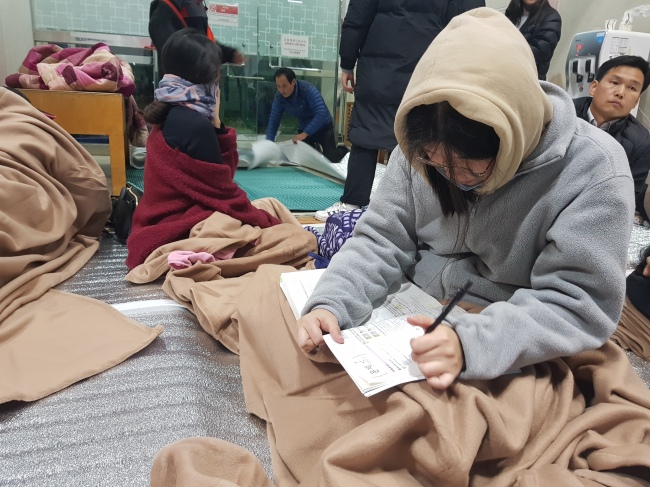 The delay, which was announced about 12 hours ahead of the start of the exam, seems so far to pose little problems, at least for private cram schools, or hagwon, as they can now take more students before the delayed exam and pocket extra profits.

Among them, those in Daechi-dong -- Seoul’s affluent district that is home to hundreds of private cram schools -- responded quickly, rolling out special weeklong programs to make the most of the extra time.

“We understand the frustration shared by students who have been preparing for the exam for years, although the delay is for their own safety. So we offer extensive courses to maximize opportunities for students to get the most out of their time,” said a lecturer from one of the private educational institutes in the area that teach multiple subjects.

Jongro Academy, one of the biggest hagwon chains here, announced plans to offer its classrooms as study halls and for tutoring sessions, targeting frustrated students looking for space to focus on the upcoming exam.

“The ministry’s announcement left me dispirited and fatigued because I have to be surrounded by books all over again for the next week. I’m worried this would have negative effect on my scores,” 18-year-old Kim Min-soo, who has been studying at one of Jongro’s branches in Gangnam, southern Seoul, told The Korea Herald.

The highly competitive annual exam is the focus of 12 years of education leading to university. Students, as well as parents, often go to extreme lengths to prepare for the all-important event.

The importance of the exam was clearly demonstrated in photographs of students taking shelter at evacuation centers in Pohang and continuing to study there despite fears of aftershocks.

With the delayed exam, sales of related books increased over 40 times from a day before the earthquake, according to Yes24, an online bookseller. 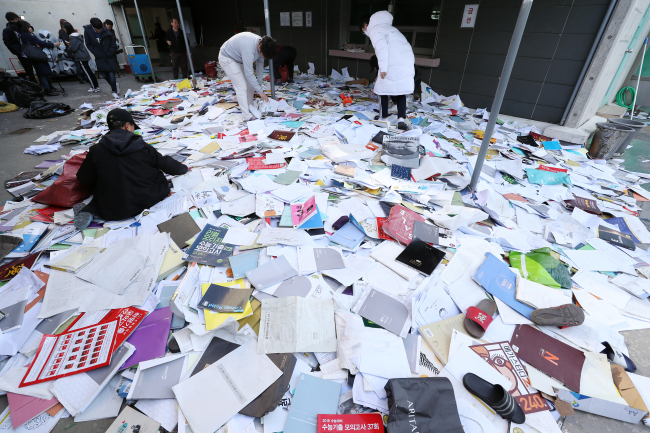 Students rummage through a pile of study aids discarded to mark the end of their preparations in Seoul on Thursday. Yonhap
Korean businesses, meanwhile, decided to postpone events they had prepared in time for the end of the college entrance examination.

Mid- to late November is considered high season for retailers and travel agencies targeting students and their families after the college entrance exam.

Korea’s entertainment and leisure industries also rolled out measures in response to the weeklong delay.

The nation’s top tourism firm Hana Tour said it had decided to allow free-of-charge changes or cancellations of trips for customers unable to travel as planned due to the delay.

As this is an unprecedented case, the travel agency said it is considering how to provide the free cancellation benefits, such as whether to limit the offer to test-takers or extend it to family members as well.

Amusement parks Lotte World and Everland have also decided to postpone or extend promotional discounts on tickets for test-takers.

Some companies that had timed their events and campaigns for the end of the exam, however, were forced to hold the programs as scheduled.

Global gaming convention G-Star has annually kicked off on the same day the college entrance exam is scheduled. But due to the delay, the gaming convention that opened Thursday to run through Sunday is expected to suffer from a fall in the number of visitors. The convention has drawn some 200,000 visitors each year, according to industry watchers.

K-pop boy band VIXX LR’s concerts scheduled for Saturday and Sunday are also expected to see fewer spectators, as the boy band is largely backed by high school fans, according to industry sources.

Meanwhile, some companies also acted swiftly to make donations to assist those affected by the earthquake.

This year marks the first time the suneung has been rescheduled due to a natural disaster. The postponement came after education authorities initially announced Wednesday that the exam would be held as planned as no severe damage had been reported to test venues in the southeastern city at the time.

The earthquake was the second most powerful recorded in the country, following a quake of magnitude 5.8 that occurred in September 2016 in Gyeongju, just 25 kilometers from Pohang.