It is the first time that the multi-subject standardized test, equivalent to the US’ SAT, has ever been postponed since it was introduced in 1994.

Education Minister Kim Sang-kon said in an urgent briefing held at 8:20 p.m. that the decision was due to “a request made by an education office in Pohang” to postpone the exam for safety. 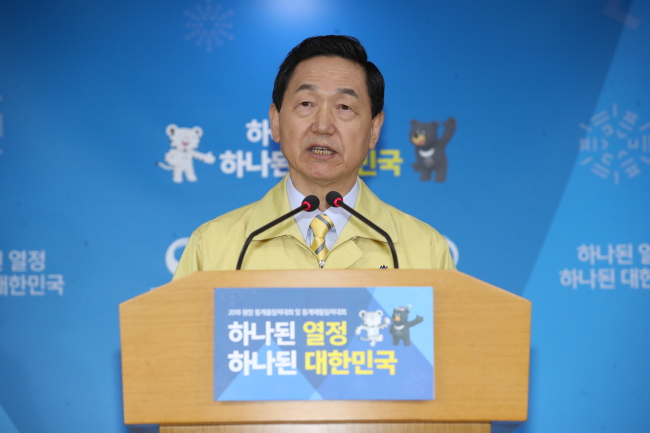 South Korea`s Education Minister Kim Sang-gon speaks during an emergency press conference in Seoul, Wednesday. The state-administered college entrance exam will be pushed back to Nov. 23 due to a rare 5.4-magnitude earthquake that struck Pohang earlier on Wednesday. (Yonhap)
“We have decided to delay the exam, considering the safety of students as the most important factor,” Kim said during the briefing.

Education authorities had initially announced earlier on that day that the exam would be held as planned on Thursday as no severe damage was reported to test venues in the southeastern city where a magnitude 5.4 earthquake, the second strongest on record, occurred.

A total of nine quakes were reported in the area, which is only 25 kilometers from Gyeongju, where the nation’s most powerful quake of magnitude 5.8 happened in September 2016.

With the delay, the suenung will take place a week later at 1,180 schools to accommodate a total of 593,527 students nationwide.