He made the call during a meeting with a group of economic advisers to the Asia-Pacific Economic Cooperation.

"Over the past 30 years, APEC realized outstanding development. It has become the focal point of economic cooperation in the Asia-Pacific region while the region's trade volume increased by more than 7 percent each year," Moon said at the meeting, known as the APEC Business Advisory Council. 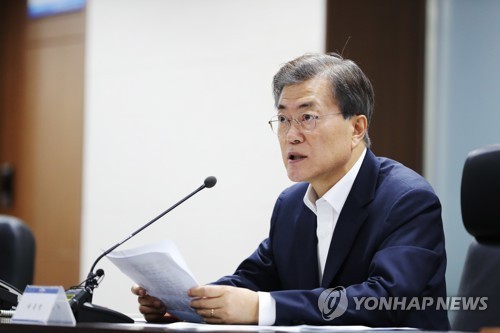 (Yonhap)
"I believe the spirit of 'economic integration through free trade' that the APEC has been pursuing has been the foundation of such success," he added.

Moon insisted it was now time to institutionalize free trade in the region.

"The spirit of APEC must further be strengthened. We must quickly establish a Free Trade Area of the Asia-Pacific as proposed by ABAC," he said.

The South Korean president arrived here earlier in the day for the annual APEC summit that involves the leaders of 21 member economies, including the United States and China.

"The path APEC walks will be the path of the global economy," he said. "I suggest that APEC set an example by being the first to expand free trade and realize inclusive growth."

To this end, the South Korean leader said his country will step up its efforts to move forward the RCEP negotiations that currently involve 16 countries, including China, Australia and all 10 member countries of the Association of Southeast Asian Nations.

"The country will actively work for an early conclusion of RCEP negotiations. I firmly believe it will be the way to realize growth and co-prosperity of APEC," he said.

Moon also called for efforts to make sure the benefits of free trade will go to all countries and their people.

"What is more important is the method and direction of growth. The world now faces extreme economic injustice and polarization. I believe making trade and growth more fair and inclusive requires special efforts from each and every country's government," he said.