[ The Korea Herald – Send E-mail ]
KORUS revision talks may begin as early as next month
By Julie Kim Jackson
Published : Nov 9, 2017 - 17:05
Updated : Nov 10, 2017 - 13:24
Negotiations between Seoul and Washington regarding the revision of the Korea-US Free Trade Agreement are expected to begin next month, according to the Ministry of Trade, Industry and Energy.

The timeline for the FTA revision process still needs to be determined because the US has yet to officially announce whether it intends to push forward with a full or partial revision of the agreement, said a Trade Ministry official. However, if the two nation’s push for a speedy process, negotiations are expected to begin in December. 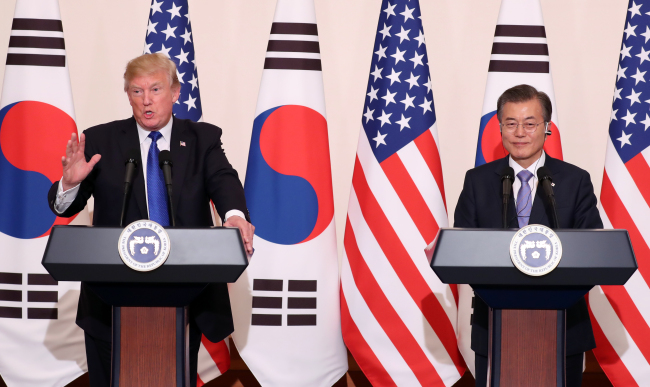 (Yonhap)
“If all the relevant procedures are completed quickly, revision negotiations can start within the next month,” a Trade Ministry official was quoted as saying by Yonhap News Agency.

The Korean government says it is following the procedure for revision negotiations as stipulated by the trade deal’s ordinary procedure law including conducting an economic feasibility study. The Trade Ministry will hold a public hearing on the KORUS FTA on Friday to gather public opinion on the trade deal in accordance with FTA amendment negotiation procedures.

The statement also added that the hearing will include Director General for Trade Policy Yoo Myung-hee briefing members of the public about the KORUS FTA, followed by a panel of experts discussing how renegotiations would affect the Korean economy.

The government said it then plans to complete its preparatory procedures for revision negotiations, including submitting a report to the National Assembly to notify its intention to renegotiate the FTA, by the end of this month.

During US President Donald Trump’s state visit to Korea earlier this week, the two governments announced they have agreed to promptly commence KORUS amendment talks following the bilateral summit meeting between Trump and President Moon Jae-in.

At a joint news conference held by Presidents Trump and Moon on Tuesday, President Moon echoed the US’ calls to “push ahead swiftly discussion related to the Korea-US free trade agreement for free, fair and balanced trade benefits.”

Trump said, “I would like to thank President Moon for instructing his trade negotiators to work closely with us to quickly pursue a much better deal. A deal, that frankly, has been quite unsuccessful and not very good for the United States.”

The US president later announced at the news conference that Seoul plan to purchase “billions of dollars” worth of American military equipment, intended to lower the US’ trade deficit with Korea.