The Financial Supervisory Service said Thursday it will reform its hiring practices after a series of irregularities emerged of new employees having ties with influential figures.

The FSS has been under fire after state auditors found in September that senior FSS officials gave special favors to some job candidates who are relatives of politicians and senior financial executives.

To eliminate influence-peddling in hiring, the FSS will abolish the process of screening resumes and cover letters and require all job candidates to take a written test in its first stage of hiring. 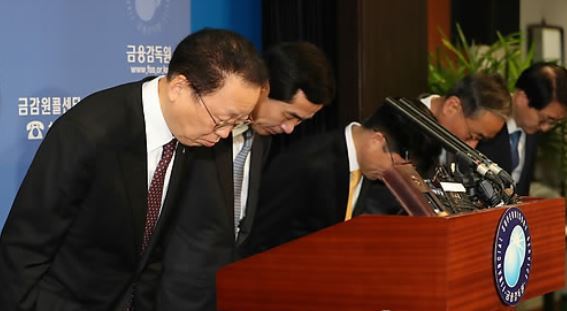 Financial Supervisory Service Governor Choe Heung-sik (L) bows along with senior FSS officials to apologize for hiring irregularities on Nov. 9, 2017. (Yonhap)
Interviewers will be told to pick recruits without having information on their names or schools, the FSS said in a statement.

About half of interviewers will consist of non-FSS officials, it said.

Choe Heung-sik, governor of the FSS, again apologized over the hiring scandals on Thursday.

"I feel deeply sorry that a series of hiring scandals in the FSS, the watchdog of the financial markets, left a big scar on the people," Choe said.

Choe also said the FSS is pushing for reforms to regain trust from people and improve its role as a financial regulator.

Another former senior FSS official was sentenced to one year in prison for pulling strings for a former politician's son to be hired as a lawyer at the FSS.

Prosecutors suspect there may be other similar cases involving more former and current FSS officials.

Besides the hiring irregularities, the FSS has been criticized for meting out lax penalties against its officials who were involved in corruption or other moral hazards.

Also, if a senior FSS official is involved in corruption, the official will be immediately relieved of his or her duties, the FSS said. (Yonhap)