"In order to achieve income-led economic growth, it is important for the government to help workers have enough earned income. A higher minimum wage is a starting point," Finance Minister Kim Dong-yeon said in a ministerial meeting in Seoul. "The government will strive to have the minimum wage policy take deep root."

President Moon Jae-in has pledged to increase the minimum wage to 10,000 won ($8.98) by 2020, as part of his efforts to narrow the income gap and boost private consumption, which may then stimulate the economy. 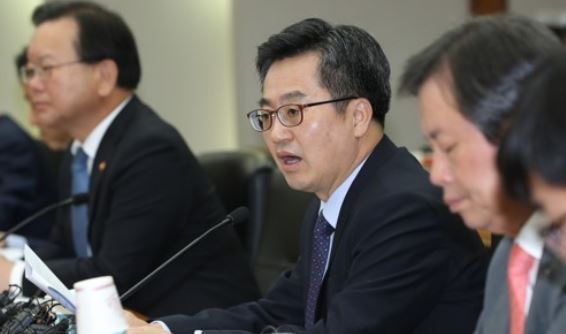 South Korea`s Finance Minister Kim Dong-yeon (C) speaks at a policy meeting in Seoul on Nov. 9, 2017. (Yonhap)
In July, the government decided to raise the minimum wage by 16.4 percent to 7,530 won per hour next year, marking its biggest jump in nearly two decades.

At the policy meeting, the government announced a set of measures to give up to 130,000 won per worker per month to small businesses, which have complained of rising labor costs due to the minimum wage hike. The government said it has secured 3 trillion won of funding to finance the subsidies.

The finance minister said the measures are aimed at sharing the financial burden of government policy and improving the growth potential of Asia's fourth-largest economy in the long run.

"The South Korean economy has been suffering from income polarization among households and businesses. The disparity has restricted domestic demand and economic growth," said Kim. "We need the cooperation of the business sector to settle the increased minimum wage policy."

However, he stressed that the subsidy plan will expire in the first half of next year, at which time the government will make a decision on whether to extend the program. (Yonhap)